Detroit ranks no. 1 as top metropolitan area for investments by foreign-based companies 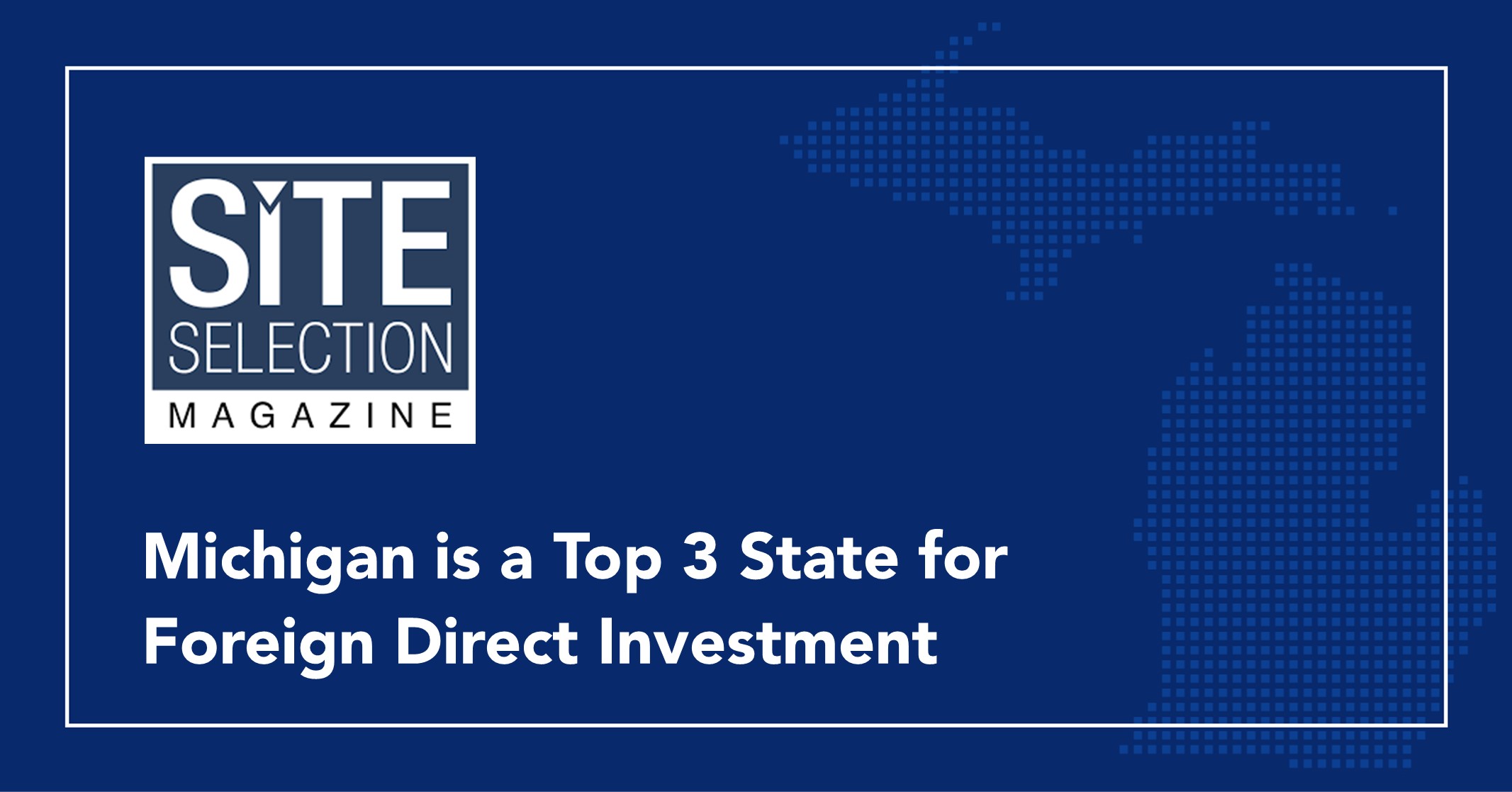 Michigan has been ranked as the third-highest ranking state and Detroit as the no. 1 metropolitan area in the nation for foreign direct investment projects, according to new rankings just announced by Site Selection magazine. The rankings are based on U.S. projects Site Selection has tracked since 2015 that have had at least a share of involvement by a foreign-based firm.

“These national recognitions reinforce the strength of our business attraction strategies and efforts to foster an environment for job-creating investments,” said Josh Hundt, Chief Business Development Officer and Executive Vice President with the Michigan Economic Development Corporation. “Global companies are continuing to realize the competitive advantages that Michigan has to offer: high-tech engineering resources, top-notch research and design, and a highly skilled workforce matched with a low cost of living and low cost of doing business.”

Home to more than 1,400 foreign companies with more than 5,000 locations throughout the state, Michigan remains a premier gateway for businesses from around the world to expand. By matching established and diverse industries with foreign companies that have similar goals, Michigan has recorded $11.3 billion in foreign direct investment since 2015 within several key industries, including automotive component and automotive OEMs.

Site Selection’s tallies also show the Detroit metro area leading the way in FDI projects over the past five years due to the automotive industry, led by Fiat Chrysler Automobiles (FCA). In May 2019, FCA announced an investment of $4.5 billion, creating 6,433 good-paying jobs at a new state-of-the-art assembly plant in Detroit and five existing Michigan facilities, that will enjoy expanded production as well as the ability to build fully battery electric models in the future. This generational project represents the largest automotive assembly plant deal in the U.S. in a decade and is the first new automotive assembly plant in Detroit in more than 30 years and last month FCA announced 4,100 Detroiters have been hired today at its new Detroit Assembly Complex.

Other foreign investment projects Site Selection recognized included Mahindra Automotive North America Manufacturing, which recently established its North American headquarters in Auburn Hills, and the 2019 announcement by global auto supplier Faurecia that it was establishing operations in Highland Park, among others.

“Our mission since 1954 has been to document where companies choose to operate, and why,” says Adam Bruns, managing editor. “Applying analytics to our proprietary projects database as well as to other meaningful data sets produces results that continue to be meaningful to the location decision-making process of our 45,000 global corporate readers.”

The FDI rankings were made in conjunction with Site Selection’s 2020 Business Climate Ranking, an annual ranking that looks at a survey of survey of corporate executives and site selectors, as well as an index of project counts and other criteria. In the face of a global pandemic, Michigan held onto its spot of #16 from 2019 to 2020, demonstrating continued confidence in Michigan’s business climate.

Other Michigan accolades this year include:

To see why foreign companies are choosing Michigan, visit https://www.michiganbusiness.org/why-michigan/fdi/.

To learn more about the services available from the MEDC to help businesses grow, go to www.michiganbusiness.org/pure-partnership.