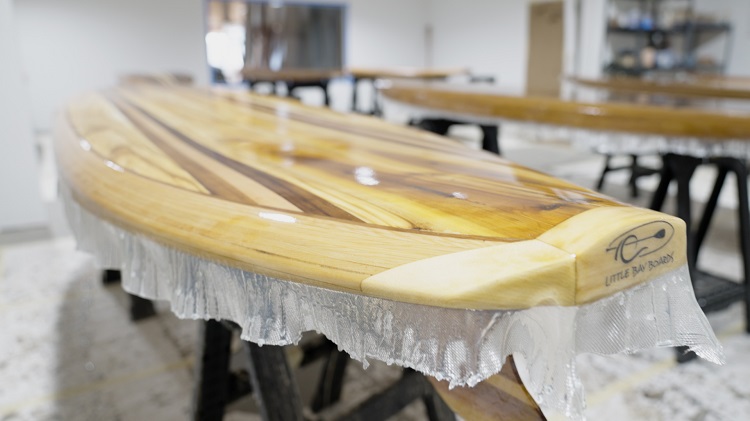 Jason Thelen knows the value of his home, Petoskey, Michigan. It’s where he grew up, where his family lives and where his ancestors settled generations ago. Petoskey is also where Jason started Little Bay Boards, a custom paddleboard and surfboard business that focuses on eco-friendly materials and artful, hand-made design.

Jason never imagined owning a business, but when the custom paddleboard he made for his daughter in the spring of 2012 picked up local interest, he coined Little Bay Boards. Almost immediately, Jason began producing and selling two boards a month out of the lean-to connected to his garage. Eventually, the demand became so great that he left his carpentry job to pursue building paddleboards full time.

Though paddleboards can be made anywhere, and Northern Michigan’s frigid winters make their use seasonal, Jason can’t imagine operating Little Bay Boards anywhere else. Michigan’s natural resources and beauty are unequaled and make the state a first-rate place to live, work and play 12 months of the year.

“I’ve traveled all over the place,” said Jason. “But there’s nothing like Michigan. I’ve never had a reason to leave because everything I needed to start my business was already here.”

Michigan’s cost of living is 10% lower than the national average, making it an ideal place to live. What’s more, the state is surrounded by 20% of the world’s fresh water and has over 100 public beaches, 650 golf courses and plenty of natural parks and trails to enjoy recreationally.

Additionally, Michigan’s rich and diverse economy has entrepreneurs flocking to the state to start their businesses. The state is ranked third in the nation for manufacturing output, first for tool and dye makers and fourth in engineering services. Michigan also boasts the eighth largest skilled trades workforce in the nation.

New and experienced entrepreneurs in the state draw the resources and support needed to take their companies to the next level from organizations like the Michigan Economic Development Corporation (MEDC), which offers services that foster partnerships, provide funding and organize networking opportunities.

For example, MEDC’s Pure Michigan Business Connect (PMBC) team connects Michigan suppliers to buyers worldwide through matchmaking events and targeted searches. The PMBC Team has facilitated over 15,000 buyer-supplier meetings since 2011 and hosted over 220 matchmaking initiatives since 2013.