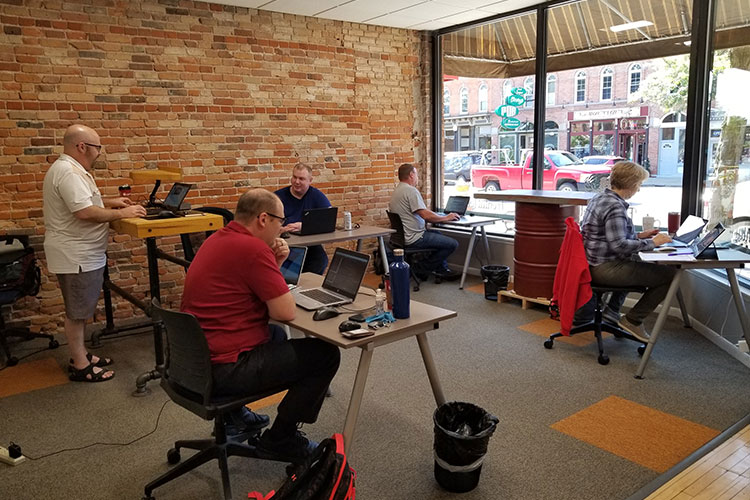 Frontal Lobe Coworking, located in the Nationally Registered historic downtown of Howell, Mich., opened in 2013 with the intention of attracting workers to a shared office space while also utilizing empty downtown buildings. The idea of developing a coworking space was brought by the City of Howell and Howell Area Chamber of Commerce to the Parker family, who already owned several buildings downtown and are active members of the community.

Courtney Tarara, owner of Frontal Lobe Coworking, says the City of Howell and Chamber presented her family with the opportunity to rehab downtown buildings and test out the coworking space concept.

“Howell is a bedroom community and there were many people working out of their homes and then moving away,” said Tarara. “It was thought that if there was a coworking location in Howell, we may be able to retain some of the younger people, specifically in the tech industry. My husband, Fabrizio, is techie and was familiar with coworking, which at the time was just in large cities like Ann Arbor, Detroit and New York.”

Tarara decided to try the concept out in a building her family already owned, while renovating the historic buildings she intended to make the future home of Frontal Lobe Coworking. Through word of mouth and educating the community about the concept and benefits of coworking, the business slowly grew in membership. By the time the renovations were completed, members didn’t want to leave the original space, so they decided to stay.

“The great thing about our space is the diversity and networking,” Tarara said. “Instead of being a home to young techies, it has become the home of many different industries and ages. Our membership age ranges from about 22 years old to 75 years old. We have had members from many industries, such as authors, web developers, counselors, tutors, accounting, insurance, real estate, aerospace, electricians and more.”

Over the years, Frontal Lobe Coworking has continuously expanded the space, but is now at capacity from a footprint perspective – though not in memberships. Frontal Lobe Coworking now has six private offices, a conference room and coworking spaces on the main and lower levels. Memberships include six-month leases on the private offices that convert to monthly; there is currently a waitlist. For the coworking spaces, Frontal Lobe Coworking offers day passes, Lite (three days/week), Full (24/7 access), Dedicated (24/7 access with private desk) and a student rate. In addition, they offer mailbox memberships and conference room rentals.

With working remotely becoming a reality for many at the beginning of the pandemic, Michigan was recognized as a top place for remote workers, citing the state’s affordable cost of living and strong communities, including Howell. For members of the nearby community, Frontal Lobe Coworking offered attractive options for remote workers. The number of private office calls Frontal Lobe Coworking received tripled, though social distancing impacted interest in the coworking spaces. Tarara says she allowed people to put their memberships on hold without charging them during those early days; despite those COVID-related challenges, Frontal Lobe Coworking found its way to the other side.

“Many people use our space as their main office or because they don’t have access to internet at home, so we never completely closed down,” Tarara said. “The office members were able to access the space and use their offices without mingling with anyone else. With the conference room available for coworking members, they were able to use that space if they needed to keep their distance as well.” 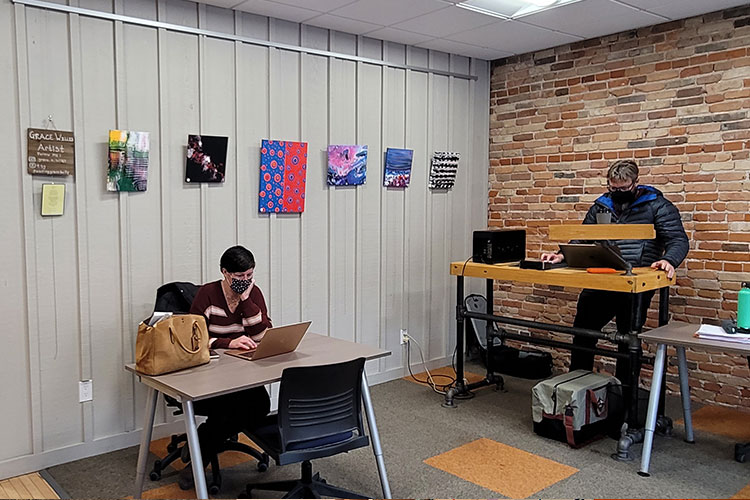 Tarara says the supportive Howell community has made all the difference in Frontal Lobe Coworking’s success, particularly thanks to the city’s Main Street program. Howell, a Michigan Main Street community, was also awarded the Great American Main Street Award in 2018, a prestigious national award that recognizes exceptional models for comprehensive, preservation-based commercial district revitalization. Howell Main Street received the elite status due their achievements in transforming the downtown district into a cultural destination through community-driven economic development and placemaking efforts.

Through the City of Howell, Tarara learned about a new grant opportunity for businesses from Kate Litwin of the Downtown Development Authority. To support micro and place-based businesses with their technology needs, the Michigan Economic Development Corporation (MEDC) Small Business Services Team launched a pilot program for Michigan Main Street (MMS) communities. Called Optimize Main Street, the pilot program combines one-on-one technology technical assistance with up to $2,500 in grant funding to support the implementation of a tech-based small business project.

By participating in the MMS program, communities have previously demonstrated the ability to provide technical assistance, training and education to place-based businesses within their respective districts. Each local MMS Program was eligible to select up to five small businesses to participate in the pilot program.

Through Optimize Main Street, Tarara received hands-on small business technical assistance, as well as $2,500 to go towards the implementation of a technology project. During the one-on-one business coaching sessions, Tarara was able to refine business best practices (like discovering the true market demand for the coworking space which allowed her to increase pricing), discuss technology barriers and streamline business practices. Tarara plans to use the $2,500 from the MEDC to update the organization’s website, streamline their registration and payment processes and improve client experience.

“This program has been fantastic,” Tarara said. “Not only did it allow for some financial assistance, which we needed to revamp our website, but it included business counseling. We have not upgraded our website since we opened nine years ago and as we have become busier, we have recognized some shortfalls in our membership process. We need a website that allows for new members to sign up online. It would be especially helpful for those needing a day pass because they are out of power or just traveling through for the day. We would also like to have the calendar included on the website, allowing for people to see what availability we have. Once completed, we will be more efficient, as well as more user-friendly. Without the grant money, we would not have been able to upgrade our website this year.”

In addition to updating their website, Frontal Lobe Coworking is continuing to make improvements to its physical space and increase coworking rental agreements to be more in-line with the market. With room to grow, Tarara knows the website optimizations will help take Frontal Lobe Coworking to the next level of customer service and community presence – and hopes to work with the MEDC in the future.

The first round of three for the Optimize Main Street pilot is complete. The program has supported 33 businesses including Frontal Lobe Coworking, resulting in 31 hours of 1:1 Technical Assistance/Business coaching and 25 hours of online, self-paced business tool access. In Round 1, $81,301.01 in grant dollars were deployed.

Find out how the MEDC is helping support the growth of vibrant, diverse and resilient communities at https://www.miplace.org/.