Entrepreneurs bring energy, imagination to ‘era of possibilities’ for Detroit 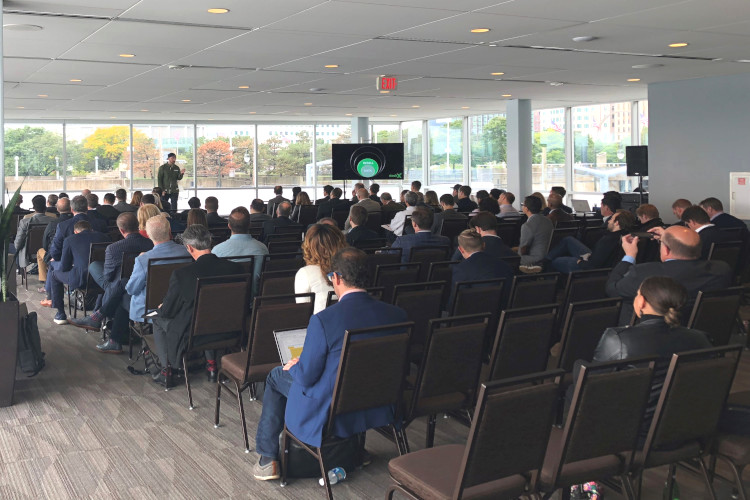 DETROIT, Mich. – For three days (Oct. 1-3), entrepreneurs and innovators are assembling at “Start MI Up: Michigan Ventures Forward,” a gathering that focuses on emerging opportunities of start-up business in Detroit. While the emphasis is on attracting startups, there’s no looking past the long-term challenge of creating sustainable business enterprises.

Day two of networking for a few hundred entrepreneurs and venture capitalists from around the country took place in a second-floor conference room in Detroit’s Port Authority building with an expansive view of the Detroit River. Amid a historic setting with recent developments nearby as a backdrop, the focus is clearly on the future.

“This is an exciting time in the development of Detroit when people are thinking about the possibilities (of a range of industries),” said Dan Gilbert, founder of Quicken Loans and Rock Ventures. His companies have invested $5.6 billion in downtown Detroit and nearby neighborhoods.

Gilbert’s keynote morning address focused on Detroit as a strategic Midwest location within a six-hour drive of 50 million consumers. He presented a portrait of Detroit as an emerging international city with an indelible brand, a city entering a new development phase of expanding investment beyond downtown, and a city that is being redefined as a place of ingenuity and possibility.

Millennials are looking for great places to live and work. A major challenge, he said, is to transform Detroit as an international destination that captures the imagination and addresses the needs of today’s coveted highly educated and mobile workforce.

Gilbert escorted the audience through recent key developments redefining the city’s skyline, including Bedrock’s investment of more than $2 billion on the site of the former Hudson’s building in the city’s central business district.

“Start MI Up,” sponsored by the Michigan Economic Development Corporation, serves as a symposium for sharing best practices, strategies for attracting capital while ultimately encouraging networking of like-minded with an eye on transforming Detroit and Michigan as a mecca for venture capitalism and mid-21st century home of mobility and autonomous-vehicle technologies.

Josh Luber, co-founder of StockX, is among the participants. StockX is Detroit’s fastest-growing start up. In mid Sept, they announced a $44-million investment backed by a new round of funding from Google Ventures and Battery Ventures. They plan to hire 1,000 employees. “We’ve created a commodified asset within an totally transparent supply-and-demand process,” he said.

New investors in the city noted the global attraction to Detroit’s positive brand equity as a place recognized internationally.

“Detroit has a reputation in cultural history that’s compelling,” said Ari Heckman, CEO, ASH: NYC, a Brooklyn-based company turned the blighted Wurlitzer Building in downtown Detroit into a $22 million boutique hotel, and is exploring transforming a 110,000-square-feet building in Eastern Market into mixed use.

“The name, Detroit, has quite a value in contrast to the negative perception of the city from a decade or so ago,” he said.

The fascination about Detroit and urban tourism is part of the “attraction force” to the city. Few other businesses reflect Detroit culture and manufacturing prowess as Shinola, one of the most iconic Detroit brands.

Shinola’s success, in many ways, helped to propel the Detroit reinvention and renewed manufacturing story. The Detroit-based company manufactures watches, wallets and bicycles; and is currently constructing hotel in downtown Detroit. Since 2012, its workforce has grown from eight to more than 200, many of whom are from the Detroit area.

“Detroit has a phenomenal history for design and manufacturing,” said Shinola CEO Tom Lewand, who noted that projected annual revenue this year is expected to top $100 million. “Five years after we established, we’re at a good place and so is the city.”