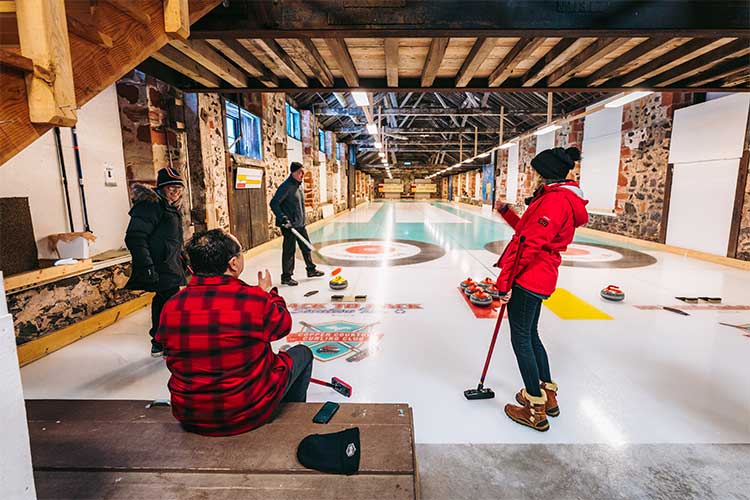 With origins tracing back to 16th century Scotland, the winter sport of curling has gained traction in recent years thanks to its growing popularity in the Olympics. This historic sport is thriving in a unique, historic location in Michigan’s Upper Peninsula, thanks to the Copper Country Curling Club (CCCC) and crowdfunding efforts through MEDC’s Public Spaces Community Places (PSCP) initiative.

Formed in 1996 in Lake Linden, the CCCC found increased local interest in curling after the 2002 Winter Olympics. With a loyal membership, the club then found its permanent home rink at the Drill Shop in Calumet in 2005. Built in 1885, the Drill Shop is a former manufacturing plant for the Calumet and Hecla Mining Company, a manufacturing facility for drilling equipment used in Keweenaw Peninsula copper mines.

After closing in 1968, the building sat empty for 37 years until it was repurposed by the curling club. According to Gary Lassila, president of the CCCC, the building was the perfect shape and length for two curling rinks. The opportunity to honor its history and bring it new life was something the club embraced.

“People know our heritage, and copper mining is so important to them,” said Lassila. “I personally, and a lot of people, just think it’s so cool that this was an original mining building. Now it’s been repurposed. If we hadn’t done anything, this building would be falling down and in total disrepair. Just to think that we’re curling in here now is pretty incredible. So much history was left in the building. There are areas where we have the drill bits that were used in the copper mines.”

The club’s two curling rinks drew interest from the community, but off-ice amenities were limited. While no strangers to the cold, the club’s 40 to 50 members struggled to connect with one another due to the icy temperatures inside the building.

“We have natural ice, so we put down the water and the air temperatures are cold enough to keep it frozen,” said Lassila. “We did have a warm area, but it was literally the size of a closet. People couldn’t just hang around; they couldn’t sit around and talk. Before, as soon as you were done curling, you just left.” 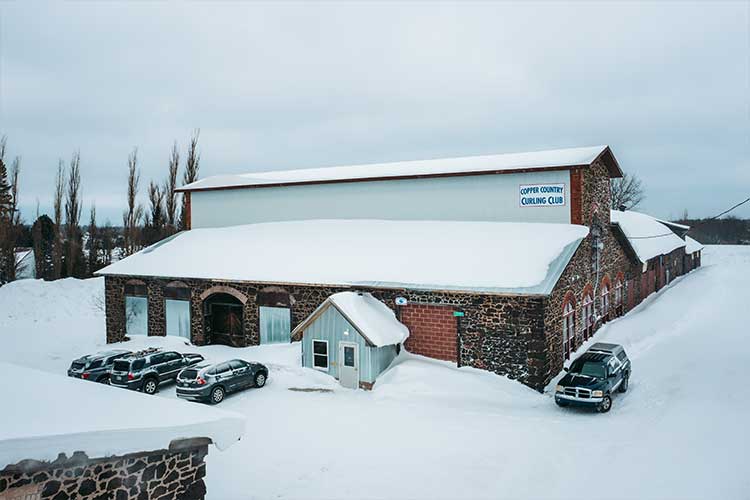 The CCCC wanted to do a major upgrade to their facility for years, but as a small club, found it didn’t have the financial resources available; the money brought in from memberships was spent throughout the year. In 2015, the CCCC partnered with Patronicity to launch a community crowdfunding campaign supported by matching funds through MEDC’s PSCP program to add a community room, new restrooms and barrier-free access throughout the facility.

PSCP is a collaborative effort of the MEDC, the Michigan Municipal League and Patronicity where residents can use crowdfunding to be part of the development of strategic projects in their communities and be backed with a matching grant from MEDC.

The CCCC raised nearly $30,000 during the crowdfunding campaign, which MEDC matched. Donations came from the local community as well as curling clubs across the country; Lassila believes the matching component of the PSCP program drove donations. “People know that if they give $20, the MEDC is going to match it and give $20 more. It was so beneficial to us. People who donated, even if they don’t curl, they know what [the CCCC] is. They know how cool it is in the community, and they feel like they had a part in it.”

With $60,000 in funding, the club constructed a warm room that includes tables, a kitchenette, television and large windows looking out over the rinks.

“Here we hang out afterwards, we talk, we watch games that are going on because we have nice windows up front,” said Lassila. “The warm room added such a social element to our club that we did not have before. It would not have happened without the MEDC.”

The CCCC’s diverse membership now includes men, women and children of all ages. The club enjoys holding open house events to introduce the community to the sport, as well as connecting with schools in the Calumet area. “Little kids are curling, and they get really competitive; they’re just having a blast,” Lassila said.

According to Lassila, the CCCC’s membership numbers are up 20 percent. While he is excited at the possibility of growing membership, he says that members will have to join a waiting list for 2023 to participate. “We are actually pretty much maxed out on our numbers,” Lassila said. “We won’t be taking any more members for ‘learn to curl’ or our leagues, but [we will] next year.”

MEDC is helping build vibrant communities across Michigan. If you have a passion to help make a great new public space in your community, learn more about the Public Spaces Community Places program at miplace.org/programs/public-spaces-community-places/. Visit Patronicity to learn about projects you can support throughout the state of Michigan.