When fintech leader and top-10 global insurance brokerage Acrisure needed to expand its headquarters, plenty of cities and states were available. Here's why Grand Rapids – and Michigan – won. 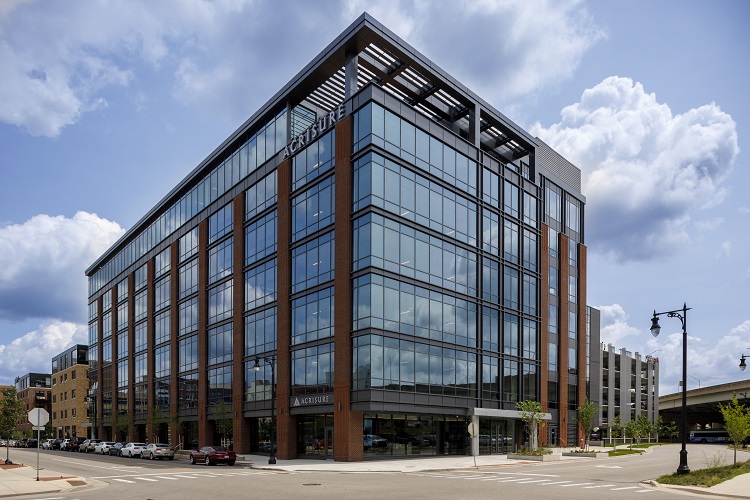 Google "Acrisure," and you'll find that the Grand Rapids-based financial services leader garners its share of headlines, most focusing on the global company's growth. The fastest growing insurance brokerage in the world, Acrisure has increased revenue exponentially in just eight years, made deep investments to tech-enable its business through AI and data analytics, and expanded into new areas such as Asset Management and Real Estate Services, with additional plans in the works.

Fast-growing companies constantly require new talent to fuel innovation and drive expansion. And notwithstanding the COVID-19 pandemic and resulting need for remote working arrangements, employees of most companies still need a place to work outside of their “home office.”

Which is why, in September 2019 Acrisure’s growth necessitated bigger accommodations in the form of a new headquarters. Several factors led Acrisure to identify the Studio Park development in downtown Grand Rapids as its new global HQ, which it officially occupied in summer 2021.

Michigan is home to a deep bench of workers with experience in the insurance industry, boasting more than 186,000 in the professional and corporate services sector alone, offering businesses a density and diversity of skilled talent compared to other states. What’s more, Michigan is particularly well-situated to support professional industries – including the financial services sector – as it can offer a quality of life and cost of living that is appealing to talent in an industry that can largely choose to be based anywhere. Finally, Michigan is known for its collaboration among private and public partners, ensuring a seamless experience for companies to do business within the state.

“Acrisure began as a Michigan company and became a West Michigan company in 2008. Through our robust growth to over $3 billion in revenue and tech transformation, West Michigan remains our home,” said Acrisure Co-founder, President and CEO Greg Williams. “We’re glad to have worked with the MEDC and other partners to arrive at our choice of Studio Park, which absolutely strengthens the caliber of talent we attract.”

Acrisure's relocation and expansion into downtown Grand Rapids will generate $33 million in investment. Acrisure has also pledged to create at least 400 new, good-paying jobs in the state – nearly a 50% increase over its current workforce – with wages at 125% of the regional area wages.

The support of the state through the Michigan Economic Development Corporation (MEDC)’s Michigan Business Development Program and the Good Jobs for Michigan program was also a significant factor in securing Acrisure’s global headquarters by helping Michigan successfully compete for this high-impact project over other sites in Illinois, Indiana and New York.

Altogether, the Good Jobs for Michigan program has supported six transformational projects throughout the state that committed to create more than 11,300 jobs in Michigan that are generating $1.56 billion in net new revenue to the state and $6.6 billion in private investment.

Acrisure’s decision to build a new global headquarters in Michigan has attracted national attention in the years since, as well, with the project having contributed to Michigan's receipt in 2020 of a Silver Shovel Award for excellence in economic development and job creating projects by Area Development's 15th Annual Gold & Silver Shovel awards. The award recognizes states that attract large-scale investment projects which create significant numbers of new jobs.

Today, Acrisure remains a global powerhouse in financial services, right in the heart of West Michigan - knowing that the MEDC will be there to support them. To learn more about the programs and services MEDC offers to businesses considering locating or expanding in Michigan, please visit michiganbusiness.org.