The Saugatuck Gap Filler Radar was operational from 1958-1968 as part of a continent-wide effort to protect the United States from potential attack during the Cold War. Historic designation is an important step to preserving the site and identifying a future use. 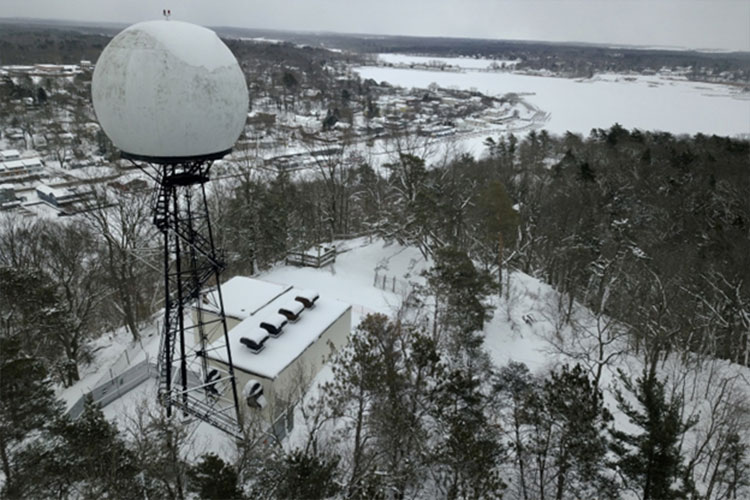 LANSING, Mich. – The Michigan Economic Development Corporation (MEDC) today announced that the Saugatuck Gap Filler Annex has been listed in the National Register of Historic Places. Administered in Michigan by the State Historic Preservation Office (SHPO), the National Register of Historic Places is the United States federal government's official list of districts, sites, buildings, structures, and objects deemed worthy of preservation for their historic significance.

“The iconic radar ball in Saugatuck is a well-known community landmark and is visible for miles along the shore of Lake Michigan,” said Michigan’s Deputy State Historic Preservation Officer Martha MacFarlane-Faes. “A key aspect of the National Register program is to document and honor places that are associated with events that have made a significant contribution to the broad patterns of our history. The Saugatuck Radar and the groundbreaking technology it once employed was an important piece of our national defense infrastructure during the height of the Cold War.”

Located high atop the Mount Baldhead sand dune between downtown Saugatuck and Lake Michigan, the Saugatuck Gap Filler was constructed in 1957 to address the threat of an air attack of Soviet planes flying from the north over the North Pole in the 1950s and 1960s, during the period known as the Cold War.

After the conclusion of World War II in 1945, the wartime allies United States and the Soviet Union quickly became adversaries in a quest for industrial, technological, and military superiority. Advancements in weapons, missiles, and space technology came rapidly amid fear of an enemy attack. Throughout the Cold War, the world was immersed in an unrelenting sense of impending nuclear doom as both countries engaged each other through proxy wars and traded military and political feints. In the United States, air raid siren tests, duck-and-cover drills, and “we interrupt this program” announcements punctuated the endless waiting-in-dread anticipation of the rumble of Soviet nuclear bombers approaching over the northern horizon or the silent fall of a nuclear missile.

In North America, the potential for an air attack of Soviet planes was seen as a credible and constant threat. An immense continent-wide network of automated and manned radar installations that sought to identify, track, and respond to airborne attackers was quickly being built. This system was controlled by the most capable real-time digital computers of its era and led the cutting edge of digital processing, networking, and communications.

But there was a weakness in the radar armor. High-power radar installations could “see” far into the skies, but could not identify potential aircraft flying at low altitude or near hilly terrain. These gaps in the system could present an opportunity for literal “under the radar” attacks. Special “Gap Filler” radars were needed to scan the horizon in these specific areas.

The Saugatuck Gap Filler became operational in 1958 with a specific mission to search the skies over Lake Michigan where enemy planes might target Chicago or the steel mills of Indiana. The radar antenna atop the dune spun relentlessly, feeding data into vacuum tube storage equipment being transmitted continuously via telephone lines to the Custer Air Force Station near Battle Creek.

At the heart of this nationwide radar revolution was the first modem ever used in an actual application. Dozens of Gap Filler radars were built across the country to fill in the network scanning for attack. In 1963, the Saugatuck Radar was upgraded with higher-power radar equipment, representing refinements in the technology only a few years after it was built. At this time, the radar antenna atop the tower was enclosed in the white globe-shaped “radome” made of fiberglass which is a beloved Saugatuck icon today.

By the late 1960s, the threat of aircraft attack was quickly being overshadowed by the threat of intercontinental ballistic missiles, which fly too high and too fast for gap filler radars to recognize. The Saugatuck installation was deactivated in 1968. The next year, the city of Saugatuck purchased the unused site near the top of the popular tourist steps to the summit of the dune. The remains of this technology have sat in silence since this time, as other such radar stations across the country were torn down. Of 131 Gap Fillers known to have been built, Saugatuck’s is believed to be one of just a small handful, and the most technologically complete, which remains.

“The white radar ball is one of the most visible landmarks in Saugatuck and nearby Douglas, but the real significance is the technology which was used inside the ball and in the diminutive bunker building below,” said Michigan SHPO Project Coordinator and lead nomination reviewer Nathan Nietering. “The radar installation at Saugatuck played a very real role in protecting our nation, even though the feared Soviet air attack never came to be. The Cold War sped up the development of groundbreaking technology such as real-time computing, interactive graphics, modems, and wide area networking, and the Saugatuck Gap Filler still embodies this incredible period of history.”

The National Register listing is an important step in documenting the history of the site and planning for a future use. In 2021, the Saugatuck City Council approved a resolution that established the Mt. Baldhead Radar Station Workgroup with the mission to protect, preserve and promote the radar station. Over the course of the next 15 months, the group met its goal to stabilize the equipment building and secure the site, and make it ready for future preservation activities.

“The group’s efforts to stabilize and restore the installation created a lot of interest in the community, and more importantly, began the process to increase people’s understanding of the history of this community asset,” said Saugatuck City Council Member Russ Gardner. “Now, with the first phase of the project completed and with the recent National Register listing, it stands as a historical gem and the crown jewel of the city’s Mt. Baldhead Park. Without the support of the city and a multitude of volunteers, who collaborated to get this project underway, the National Register project would not have happened.”

Avocational Cold War historian Chuck Gustafson was the researcher who led the effort to nominate the Saugatuck Gap Filler Radar to the National Register of Historic Places.

“I have had a fascination with early electron tube, computer, and radar technology for as long as I can remember. The combination of those in the Saugatuck gap filler radar is irresistible,” Gustafson said. “The equipment in the radar annex is a rare snapshot of that brief period where emerging digital electronics had not quite left vacuum tube electronics behind. This is the only piece of the Cold War era Semi-Automatic Ground Environment (SAGE) air defense system in public hands that remains in place nearly as it was while serving in the Cold War. To participate in nominating the Saugatuck radar to the National Register was the opportunity of a lifetime.”

To be considered for listing in the National Register, a property must generally be at least 50 years old, and must also be significant when evaluated in relationship to major historical events or trends in the history of their community, the state, or the nation. A property must also possess historic integrity – the ability to convey its significance.

Properties are nominated for listing by each state’s SHPO, often in partnership with local individuals or community organizations. For more information about the National Register of Historic Places program in Michigan, and on how to nominate a property, visit michigan.gov/nrhp.

To learn more about the work to document and repair the Saugatuck radar site, visit the Mt. Baldhead Radar Station Preservation Workgroup.

About the State Historic Preservation Office: Focused on the historic preservation of culturally or archaeologically significant sites throughout the state, Michigan's State Historic Preservation Office’s main function is to provide technical assistance to local communities and property owners in their efforts to identify, evaluate, designate, interpret and protect Michigan’s historic above- and below-ground resources. SHPO also administers an incentives program that includes state and federal tax credits and pass-through grants available to certified local governments.