“These community revitalization projects will build housing and commercial space for small businesses, building on our ongoing efforts to grow the economy, create good-paying jobs, and invest in every region of Michigan,” said Governor Whitmer. “By directly investing in Coldwater, Laingsburg, Marine City, Cheboygan, and Port Huron, we are spurring local economic growth and transforming underutilized properties into productive spaces. We will continue working together to make Michigan an attractive place to live, work, and play.” 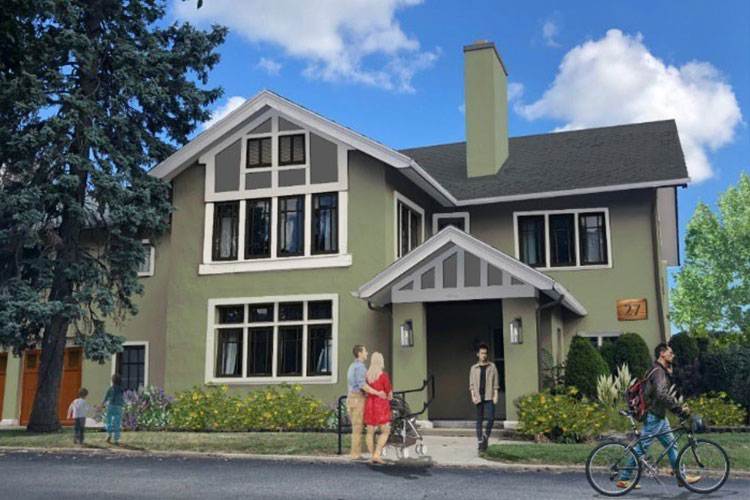 27 Marshall Street, LLC - Coldwater
27 Marshall Street, LLC will rehabilitate the vacant, historic, and functionally obsolete Gillespie building into seven new apartments in downtown Coldwater. Originally built as a funeral home in 1920, the building was designed by Robert C. Spencer, Jr., a colleague of Frank Lloyd Wright and a prominent figure in the Prairie School design movement. It is believed to be one of only two remaining buildings in Michigan designed by Spencer.

When completed, the project will provide workforce housing with rental rates expected to be accessible for households making between 80 and 120 percent of the Branch County area median income. In addition to providing needed housing, the project will improve the surrounding property to provide parking and enhanced outdoor space for tenants.

The project is expected to generate a total capital investment of $1.8 million, supported by a $750,000 Michigan Community Revitalization Program performance-based grant. The project will not only renovate an important historic building in the heart of downtown Coldwater, but it will also help support local businesses and drive additional economic activity in the area.

The Coldwater Downtown Development Authority is supporting the project with a $10,000 façade grant, and the city has approved a 12-year Obsolete Property Rehabilitation Act (OPRA) tax abatement valued at $149,195. The city of Coldwater is engaged with MEDC’s Redevelopment Ready Communities program and is a participating Michigan Main Street community at the Select Level.

“This project is an extraordinary example of commitment to community. Our staff has all worked closely with the developer, the MEDC, and local boards and commissions to move this project forward through many hurdles,” said Coldwater Economic Development Coordinator and Main Street Director Audrey Tappenden. “Preserving the former Gillespie building and providing housing to the community will have a tremendous positive impact on the downtown.”

Highland Apartments – Laingsburg
The city of Laingsburg has received $184,119 in Community Development Block Grant funds for the Highland Apartments rental rehabilitation project in the heart of downtown Laingsburg. The first floor of the building currently features a vacant commercial storefront, while the second floor has been vacant for approximately five years. The city of Laingsburg adopted an economic development strategy in 2018 that prioritized creating residential units in mixed-use developments, encouraging the redevelopment of downtown buildings, and increasing private investment. When completed, the project will consist of two residential units, one of which will be affordable and occupied by low- to moderate-income households for five years.

The Community Development Block Grant funds will be used for interior demolition, construction of new walls, plumbing, and mechanical upgrades. The installation of new fixtures, energy star appliances, cabinetry, flooring and painting will also be completed. In addition to bringing needed residential space to downtown Laingsburg, the project will restore a vacant, underutilized property into a vibrant building and will help revitalize the downtown district.

The Laingsburg Downtown Development Authority is contributing a $5,000 grant for façade improvements. The city of Laingsburg is certified with MEDC’s Redevelopment Ready Communities program.

Marine City Apartments, LLC – Marine City
Marine City Apartments, LLC will renovate the historic, vacant and functionally obsolete Geck Building in downtown Marine City into a mixed-use development. When completed, the project will include three commercial spaces and six apartments with a total of six garages. The project will also include public improvements including public utility relocation, streetscape improvements, public sidewalk replacement, and an update to the urban stormwater management system. Residential demand is very strong in downtown Marine City, but available quality housing is hard to obtain. This project will contribute much needed housing options, which will increase activity in downtown. The project will also bring new retail services and new investment to the downtown.

The project is expected to generate a total capital investment of $2.1 million, supported by a $746,244 Michigan Community Revitalization Program performance-based grant. In addition, the St. Clair County Brownfield Redevelopment Authority has received Michigan Strategic Fund approval of $119,275 for the reimbursement of brownfield remediation activities at the site. The project will restore a prominent, long-vacant historic building into a vibrant mixed-use development that will bring housing, walkability and additional economic development to downtown Marine City.

The county is supporting the project through the approval of the local tax capture, valued at $149,725. Marine City is engaged with MEDC’s Redevelopment Ready Communities program.

Purple Tree Rental Rehab Project – Cheboygan
The city of Cheboygan has received $523,580 in CDBG funds, which includes $16,480 in grant administration costs, needed for the Purple Tree Rental Rehab project in downtown Cheboygan. The building currently has two commercial storefronts on the first floor, while the second floor has been blighted and vacant for more than 20 years.

The project is expected to generate a total private investment of $328,488 and in addition to bringing much-needed housing to downtown Cheboygan, it will also help revitalize the downtown district. The city of Cheboygan is expected to support the project with an Obsolete Property Rehabilitation Act (OPRA) tax abatement valued at $85,893. Cheboygan is certified with MEDC’s Redevelopment Ready Communities program and is a participating Michigan Main Street community at the Select Level.

“This is another great example of the city’s partnership with MEDC and a local property owner to continue the momentum of change going on in our Downtown,” said Cheboygan Mayor Les Tebo.

Quay Docks, LLC – Port Huron
Quay Docks, LLC plans to renovate a functionally obsolete and vacant building on Quay Street in downtown Port Huron into a mixed-use development. When completed, the project will include two new commercial spaces on the first floor and in the basement, and five new apartments on the second floor. The project will also incorporate a green roof to help with downtown air quality, LED lighting, and energy efficient equipment and appliances.

The project is expected to generate a total capital investment of $3.2 million and create 30 full-time equivalent jobs, supported by a $681,701 Michigan Community Revitalization Program performance-based grant. The reuse and rehabilitation of the existing building and the addition of new commercial and residential tenants will increase the number of people working and living in the downtown and reflects an increased interest in living, working and enjoying communities that feature walkable amenities.

“These five development projects reflect our continued focus on supporting innovative placemaking efforts in communities throughout the state that lays the foundation for long-term economic wins and greater opportunity for Michiganders,” said Quentin L. Messer, Jr., CEO of MEDC and President and Chair of the MSF Board. “We are grateful to the Governor and legislators for their continued support of the Michigan Community Revitalization Program among other efforts. By working with local partners to focus on traditional downtowns and increase much-needed housing options, Team Michigan is building on our strong sense of place while supporting vibrant, unique places where current Michiganders and those we will attract can live, work, visit, and play.”