“These projects demonstrate our continued focus on supporting community projects that fill housing needs for our residents, build a foundation for long-term economic opportunity, and help us put Michiganders first,” said Governor Gretchen Whitmer. “By contributing to traditional downtown districts and revitalizing underutilized properties, today’s projects are helping to reinforce these communities as attractive places to live, work and play. Together, we will keep growing our economy, investing in our communities, and delivering on kitchen-table issues for our families.”

The 900 W. Leonard Redevelopment Project will include the new construction of a four-story mixed-use building on the Westside of Grand Rapids. When completed, the project will include 120 residential units, retail space on the first floor, a common area, and underground parking. Public infrastructure improvements will include road repair, sidewalks, curb and gutter work, and the installation of a public bus shelter.

The project is expected to generate a total capital investment of $18.2 million and create 10 full-time equivalent jobs, and will reactivate a vacant, blighted space into a vibrant building that will contribute to the walkability, vitality, and density in the area.

“Victory Development Group is very excited to bring Victory on Leonard to the Westside of Grand Rapids. By addressing the housing need of the community, this mixed-use, 120 residential unit project replaces an abandoned building and will have a positive impact on a neighborhood known for its long and rich history,” said Jack Hoedeman, partner at Victory Development Group, developer of the project. 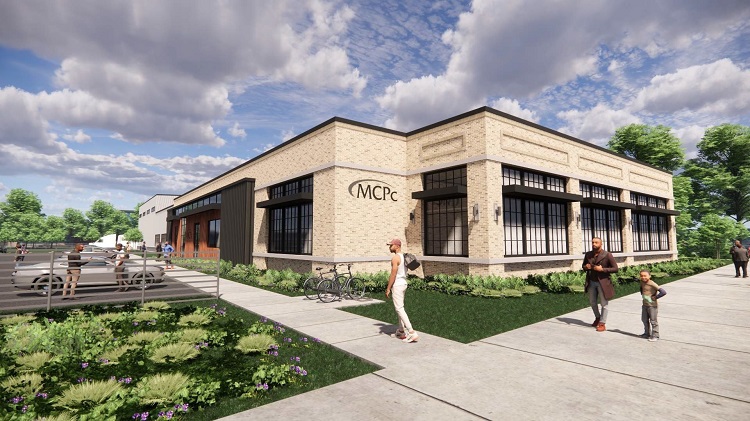 The 1601 Madison Redevelopment Project will result in the new construction of an industrial office building in the Cottage Grove area of Grand Rapids. The new building will be leased to global data protection provider MCPc, who plans to relocate 69 existing full-time employees and create an additional 28 full-time jobs at the site. Public infrastructure improvements will include street lighting, curb and gutter work, new sanitary and storm sewers, water mains, and sidewalks along Madison Avenue.

The project is expected to generate a total capital investment of $12.8 million and will serve as a key starting point for the revitalization of the Cottage Grove area. The reactivation of this underutilized property is expected to attract additional companies to the area, resulting in continued expansion and additional jobs for the area.

“We are excited about bringing back good-paying jobs to the Madison Square neighborhood. With our partnership with MCPc, we are committed to ensuring neighborhood hiring and workforce training,” said Jon Ippel, executive director at Amplify GR. “But environmental justice is an equal part in this project. Because of this funding, we were able to clean up a century-old facility – providing a healthier landscape for families in the neighborhood while providing access to living wage jobs. We want to see neighborhoods flourish for generations to come.”

The Hastings Michigan Ave Project will include the construction of a new four-story, mixed-use building in downtown Hastings. When completed, the project will consist of 21 residential units, retail space on the first floor, a common area and surface parking lot. Public infrastructure improvements will include sidewalk, curb, and gutter improvements.

The project is expected to generate a total capital investment of $4.8 million, supported by a $750,000 Michigan Community Revitalization Program performance-based grant. The Hastings Brownfield Redevelopment Authority has received MSF approval of $64,756 in state tax capture for the reimbursement of brownfield remediation activities.

The project will transform this underutilized property into a vibrant, attractive development that will bring needed housing and density to downtown Hastings. It is also expected to generate increased economic activity and act as a catalyst for additional revitalization in the community.

“We are extremely excited and thankful to have partnered with the City of Hastings and the MEDC on this wonderful project. This new development will help to further activate the Hastings downtown area by providing much needed housing,” said Chris Veneklasen, president of a.j. Veneklasen, developer of the project. “A project like this would not be possible without the financial support from the MEDC as well as the incentives provided by the city. This great investment by all will yield valuable returns to all stakeholders for a lifetime.”

“These three development projects reflect our continued focus on supporting innovative placemaking efforts in communities throughout the state, laying the foundation for long-term economic wins and opportunity for Michiganders,” said Quentin L. Messer, Jr., CEO of MEDC and President and Chair of the MSF Board. “By focusing on traditional downtown districts and revitalizing public spaces, including the creation of much-needed industrial real estate, we are working with our local partners in West Michigan to establish vibrant, unique places for continued business growth and that residents and visitors can enjoy.”