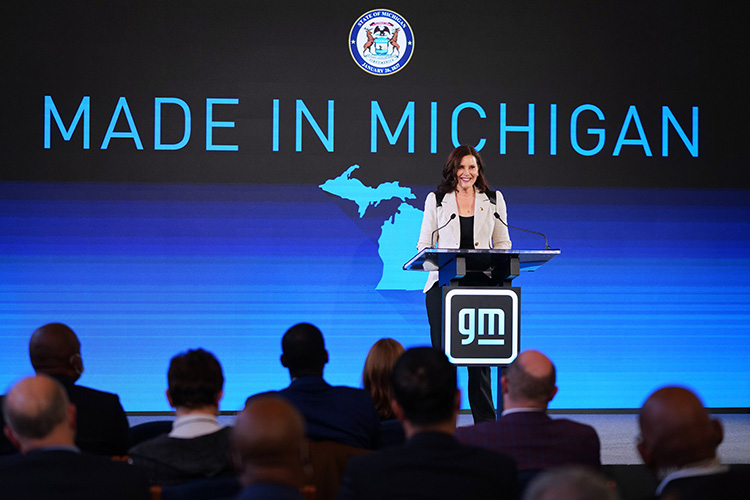 “GM’s $7 billion investment in Michigan—the largest in their history—will create and retain 5,000 good-paying jobs and enable us to build on our legacy as the place that put the world on wheels,” said Governor Gretchen Whitmer. “When it comes to investing in Michigan, GM and I have the same philosophy: ‘Everybody In.’ Michigan’s future is bright, and I will continue working with anyone to make transformational investments in our economy, create good-paying jobs, and empower working families.”

The Michigan Strategic Fund approved support earlier today for GM’s transformational projects in Orion Township and the Lansing area, creating 4,000 new jobs and generating $6.5 billion in total capital investment. In addition to these EV-related investments in Michigan, GM also announced today it is investing more than $510 million in its two Lansing-area vehicle assembly plants to upgrade their production capabilities for near term products. Today’s announcement cements the auto manufacturer’s commitment to creating an all-electric future from within Michigan and grows the state’s momentum as a leader in electric vehicle and advanced automotive manufacturing.

“Today we are taking the next step in our continuous work to establish GM’s EV leadership by making investments in our vertically integrated battery production in the U.S., and our North American EV production capacity,” said Mary Barra, GM Chair and CEO. “These important investments would not have been possible without the strong support from the Governor, Michigan Legislature, Orion Township, the City of Lansing, Delta Township as well as our collaboration with the UAW and LG Energy Solution. These investments also create opportunities in Michigan for us to bring our employees along on our transition to an all-electric future.”

General Motors plans to expand at its Orion Township facility to convert part of the site to support the production of EV trucks. The company will construct several additions to the facility, renovate certain areas and make site improvements over the next three to five years, along with adding machinery, equipment, and special tooling. The project is expected to generate a total capital investment of $4 billion and create 2,300 jobs. The project will also retain 1,000 jobs.

Through its joint venture with LG Energy Solution, GM also plans to construct its third U.S. Ultium high-volume battery cell manufacturing facility in the city of Lansing and Delta Township. The facility will include a clean room environment, machinery and equipment that will allow for the high-volume output necessary to produce cells at this capacity. The project is expected to generate a total capital investment of $2.5 billion and create 1,700 jobs.

GM’s decision to expand in Michigan will have a far-reaching impact on the entire state, with the influx of jobs resulting in spinoff investments and local redevelopment opportunities. Over 20 years, more than $28.8 billion in new personal income is expected to be generated by the direct, indirect, and induced jobs this opportunity will create, much of which will be spent at local small businesses throughout the community and the state. In addition, the project has an employment multiplier of 3.8, which means that an additional 2.8 jobs in Michigan’s economy are anticipated to be created for every new direct job, due to the extensive supply chain that exists in Michigan.

The Michigan Economic Development Corporation also authorized a State Education Tax abatement to be used in conjunction with the locally approved Orion Township abatement in support of the GM expansion.

The Orion assembly plant and Ultium battery cell plant projects are the first to be approved utilizing the new Critical Industry Program and Strategic Site Readiness Program signed into law by Gov. Whitmer in December. These programs were created to ensure Michigan could effectively compete for billions of dollars in investment and attract tens of thousands of jobs to bolster the state’s economy.

“This project will create new opportunities for businesses of all sizes across the state to ensure that Michigan retains its strong supplier network and provide a platform for further investment throughout Michigan. GM’s decision underscores the strength of the workforce within our state’s automotive sector and the bipartisan, Team Michigan commitment to winning the future of mobility and EV manufacturing here in Michigan,” said MEDC CEO and Michigan Strategic Fund President and Chair Quentin Messer Jr. “We appreciate GM’s continued vote of confidence in Michigan and their partnership on this historic economic win for our friends and neighbors, and are encouraged by the economic opportunity impact it will have across our state for decades to come.”

“We are thrilled to partner with and support the continued growth and innovation of General Motors at the Orion Assembly Plant here in Orion Township. The new investment is a clear indication that GM trusts the hard-working people of Southeast Michigan as they continue their transition from automaker to platform innovator,” said Orion Township Supervisor Chris Barnett. “Not only are we excited about the thousands of jobs that will be created and the state-of-the-art electric vehicles rolling off the line, but the ripple effect this investment will have on our local economy will make a substantial positive impact for our residents and small businesses for decades to come.”

The city of Lansing has unanimously approved a Renewable Energy Renaissance Zone and PA 198 agreement. Lansing and Delta Township also both passed unanimously an extended 425 revenue sharing agreement for the plant for 25 years. The Lansing Board of Water and Light’s Board of Commissioners also unanimously passed a special electric rate for Ultium. Additionally, in order to construct the new assembly plant, Delta Township and the Lansing Board of Water and Light will extensively and rapidly expand infrastructure capacity in support of the site.

“LEAP has been proud to lead regional efforts around this pivotal historic moment for Michigan and the Lansing region. We collectively thank Ultium and its investing partners for choosing the Lansing region and Michigan over other location options, and acknowledge the crucial personal leadership of Governor Gretchen Whitmer and MEDC CEO Quentin Messer, our state legislature and the outstanding leadership of Lansing Mayor Schor, Delta Township Supervisor Ken Fletcher and BWL CEO Dick Peffley,” said Bob Trezise, president and CEO of the Lansing Economic Area Partnership. “This project represents a secure future for our region and state in making electric powered vehicles, batteries and systems, along with potential semiconductor/chip-making and other high technology-related companies and suppliers that will follow the core EV and battery investments to build the future of mobility.”

As Michigan works to secure its leadership in automotive and EV manufacturing, GM’s expansions will continue to ensure long-term economic opportunity for the manufacturing workforce in the region, while solidifying and strengthening jobs and economic growth across the supply chain throughout the state.

“In a fast-evolving industry that advances toward technologies like electric vehicles, UAW members in Michigan knew they could face challenges or benefit from opportunities as the auto industry evolves. Today, through the work of Governor Gretchen Whitmer and her administration, General Motors, and the hardworking women and men of the UAW, Michiganders seized the opportunities of the future. Today’s announcement positions Michigan to remain at the center of the auto industry's evolution and positions UAW members and their families to benefit for decades to come.”