THIS JUST IN: GM to invest $2.2 billion at its Detroit-Hamtramck Assembly plant 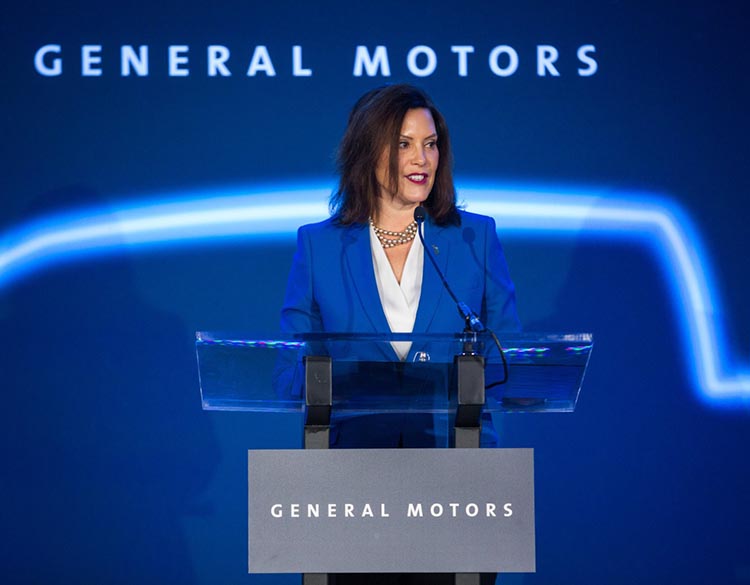 Gretchen Whitmer speaks at the General Motors press conference about the company's plans for its Detroit-Hamtramck plant. Photo by Jeffrey Sauger for General Motors.

General Motors today announced plans to invest $2.2 billion at its Detroit-Hamtramck Assembly plant to produce battery electric trucks and other electric vehicles. When the plant is fully operational, the investment will create more than 2,200 manufacturing jobs at the facility.

“Today’s announcement builds on a new chapter in Michigan’s automotive manufacturing heritage, proving once again that the vehicles of the future will be built, tested and deployed here in our state,” said Gov. Gretchen Whitmer, who joined GM leadership along with state, local, federal and UAW officials at the announcement. “We are proud to be here today, supporting GM in bringing 2,200 good-paying manufacturing jobs for our auto workers and getting Hamtramck back online, helping to bring their vision of an all-electric future to life.”

GM plans to build a variety of all-electric trucks and SUVs at the facility, including the Cruise Automation’s Origin, a multi-purposed shared autonomous vehicle that was unveiled in San Francisco last week. GM’s first all-electric truck will be a pickup, with production scheduled to begin in late 2021. Detroit Hamtramck will be GM’s first fully-dedicated electric vehicle assembly plant.

In addition to the $2.2 billion investment into Detroit-Hamtramck Assembly, GM also announced it will invest $800 million for supplier tooling and other projects related to the launch of the new electric trucks.

Last week, GM announced it would invest at least $3.5 billion in Michigan over the next 10 years, including today’s announcement at its Detroit Hamtramck facility. These commitments by GM at Hamtramck and statewide solidify the state’s position as the global leader in automotive design, manufacturing and future mobility.

Michigan Economic Development Corporation CEO Jeff Mason said GM’s decision to expand in Michigan will have a far-reaching impact on the entire state. Estimates from the Center for Automotive Research show every job in an automotive assembly plant has a multiplier of eight jobs throughout the supply chain.

“We are proud to be able to support this investment in our state and further solidify Michigan’s position as the undisputed leader of automotive manufacturing and innovation. This announcement builds on the major investments made in Michigan’s automotive and mobility strengths over the past year,” Mason said.

The announcement at GM’s Detroit Hamtramck facility starts the new year strong for Michigan’s automotive industry, and follows a series of major auto announcements in Southeast Michigan in 2019 creating thousands of manufacturing jobs in Michigan.

In December, Ford announced it will double its operations in two key facilities and establish a new vehicle modification center in southeast Michigan. In doing so, Ford is extending Michigan’s leadership in the design and production of autonomous and electric vehicles — all while creating 3,000 well-paying and skilled trades jobs and investing more than $1.45 billion in the region.

Michigan has always been the leader of the automotive industry, and as vehicle and transportation technologies continue to evolve in amazing ways, Michigan is continuing to lead the way. Visit PlanetM.com to learn more about how Michigan is driving the next generation of transportation.

Visit michiganbusiness.org/why-michigan to learn why businesses are choosing to invest in Michigan.