Ford will add 3,000 jobs, invest $1.45 billion at two of its key Southeast Michigan manufacturing sites with support from the Michigan Strategic Fund 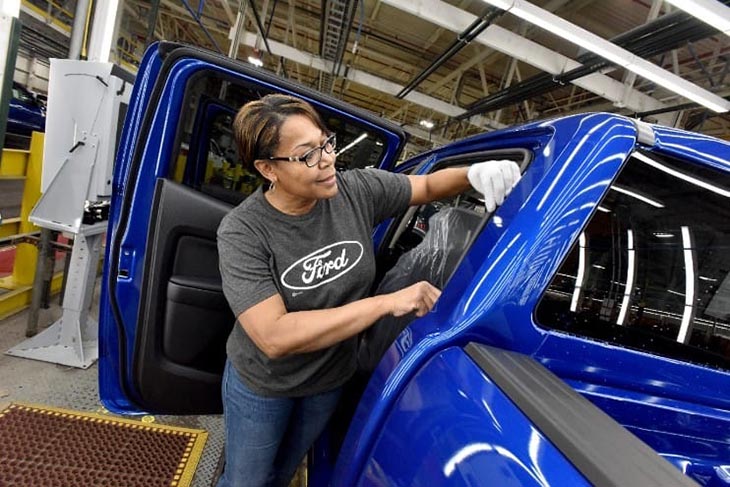 With support approved today by the Michigan Strategic Fund, Ford is investing approximately $750 million and adding 2,700 new direct jobs at its manufacturing facility in Wayne, Mich. during the next three years. Ford will install new equipment to support production of the all-new Ford Bronco and Ford Ranger, as well as create a new vehicle modification center at that location where Ford’s first autonomous vehicles will be completed starting in 2021.

At its Dearborn Truck Plant (DTP), Ford will add 300 jobs and invest nearly $700 million in new manufacturing equipment and tooling to support production of new electrified variants of its F-150 truck series, producing both a hybrid and fully electric vehicle. Ford will also create a new battery operation at that location, where workers will assemble battery cells into battery backs for the F-150 hybrid and F-150 battery electric vehicles.

“This is great news for Michigan auto workers, their families, and our economy as a whole,” said Governor Whitmer. “I’m glad Ford recognizes that Michigan is home to some of the most innovative, hardworking people in the world, and has opened up opportunities for 3,000 new good-paying jobs in our state. Today’s announcement proves that in Michigan, the state that put the world on wheels, we’re ready to build, test, and deploy the cars of the future. Let’s get to work.”

The project will generate a total private investment of more than $1.45 billion and create 3,000 well-paying jobs, including work to install the unique self-driving technology and unique purpose-built interiors for Ford’s autonomous vehicles.

“Ford is proud to be America’s number one producer of vehicles and the largest employer of UAW-represented autoworkers,” said Joe Hinrichs, Ford’s president, Automotive. “We appreciate the strong support from the State of Michigan and our local government partners as we continue to invest in our operations and people in Michigan.”

For Ford’s commitment to creating and maintaining a minimum of 3,000 jobs with an average wage of equal to or greater than the regional average, the Michigan Strategic Fund today approved:

The Good Jobs for Michigan program allows for the capture of Michigan income taxes withheld from the certified new jobs created as a result of a business expansion or new location project. If the company does not create the jobs, it will not receive funding through the program.

Michigan Economic Development Corporation CEO Jeff Mason said Ford’s decision to expand in Michigan will have a far-reaching impact on the entire state. Estimates from the Center for Automotive Research show every job in an automotive assembly plant has a multiplier of eight jobs throughout the supply chain.

“This is a project that will provide substantial opportunities to Tier 1 suppliers, the Tier 1 supply base, and communities around the state, and will lead to further growth in our automotive and manufacturing sector throughout Michigan,” said Mason, CEO of MEDC, the state’s chief marketing and business attraction agency, responsible for enabling long-term economic opportunity for all Michiganders.

“We are proud to be able to support this type of transformational investment in our state and further solidify Michigan’s position as the global leader of automotive innovation. Ford has demonstrated a strong commitment to Michigan, and we look forward to working with them on the continued impact these expansions will have throughout our state,” Mason said.

Ford has agreed to make it a priority to work through Michigan Works! And the Michigan Workforce Development Agency to identify qualified candidates to fill these positions.

“Today’s announcement not only expands jobs in Michigan, it also helps to illustrates how collaboration between workforce and economic development creates pathways to good paying jobs,” said Jeff Donofrio, Director of the Michigan Department of Labor and Economic Opportunity.

Michigan was chosen for the expansions over competing sites in Kentucky, Missouri, and Ohio, as well as locations in Canada, Mexico and outside of North America.

Ford has longstanding roots in Michigan and has contributed significantly to the economic development of the state. Today’s announcement builds on last year’s commitment by the company to invest $740,000,000 to transform the historic, Michigan Central Station and several adjacent properties in Detroit’s Corktown neighborhood into an innovation hub for Ford’s vision for the future of transportation. In addition, this year Ford reconfirmed its commitment to keeping its headquarters in Michigan with plans of a reimagined and redesigned Dearborn campus which will also result in significant investment and economic development for the region.

In total, over the past 13 months, Ford has committed to investing $2.2 billion in the state and creating nearly 8,000 high-wage and pathway jobs in Michigan.