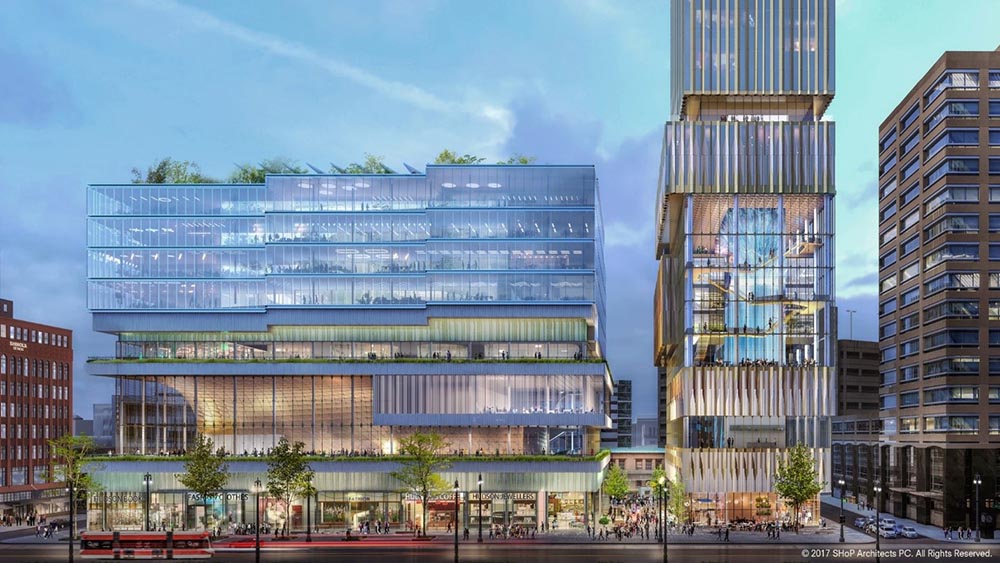 The projects, which support continued economic progress in the state, are expected to generate a total capital investment of $2,675,350,073 and create or retain 9,372 jobs in Michigan.

Bedrock Management Services, LLC received MSF approval of a Transformational Brownfield Plan for its proposed multi-site mixed use redevelopment project in downtown Detroit that will include office, retail, residential and hotel space. The project includes new construction and redevelopment at four distinct sites covering six acres: New construction of the city’s tallest tower on the site of the former Hudson’s department store; Construction of a mixed-use building on existing vacant sites known as the Monroe Blocks; an expansion of the One Campus Martius building; and the renovation of the historic Book Building and Book Tower. The entire project is expected to generate a total capital investment of $2.15 billion and support 7,738 new full-time jobs in the city of Detroit. MSF today approved a Transformational Brownfield Plan that authorizes several sources of tax capture in support of the project. The entire package is valued at $618 million, with an estimated state-benefit-to-incentive ratio is $3.20 in state revenue for every $1 of incentive.

The Detroit Economic Growth Corporation has facilitated tax abatements, sale of property, and local brownfield approvals to expedite the approval of the project.

The approval for Bedrock’s package of developments in Detroit is the first formal support awarded from the Transformational Brownfield Plan (TBP) program, signed into law nearly a year ago by Gov. Rick Snyder. The TBP program aims to revitalize communities by allowing large-scale, transformational projects to capture or receive an exemption from state sales and income taxes to redevelop challenging brownfield sites into new, vibrant developments that bring jobs and economic growth.

“These landmark developments are a milestone representing Detroit’s credible new era of hope, optimism and growth,” said Bedrock Founder and Chairman Dan Gilbert. “This process has been an outstanding example of collaboration between multiple levels of government and private industry that will unleash billions of dollars of investment, resulting in transformational impact to Detroit, the region, and the entire state of Michigan. Governor Snyder and the Michigan Strategic Fund were instrumental in getting these monumental projects to the finish line. I want to thank the Governor, MSF, and all of our local and state partners for their strong support and commitment to Detroit and the state’s transformation.”

To read more about the transformational Detroit projects, visit here https://www.michiganbusiness.org/news/transforming-detroit/. To view a video on the project, visit here: https://www.youtube.com/watch?v=qB28v9_i138.

Amazon plans to lease a new state-of-the-art, build-to-suit fulfillment center in Gaines Charter Township (Kent County) on approximately 100 acres of land currently owned by Steelcase. The project is expected to generate a total capital investment of $150 million and create 1,000 full-time, full-benefit jobs. In addition to offering an excellent benefits package, the company will offer a 95 percent prepaid tuition program for associates. MSF today approved a $4 million Michigan Business Development Program performance-based grant in support of the project. Michigan was chosen over competing sites in other Midwestern states. Gaines Charter Township is offering a 50-percent property tax abatement in support of the project. For information on careers with Amazon, visit http://amazondelivers.jobs.

To read more about the Amazon project, visit here https://www.michiganbusiness.org/news/amazons-giant-leap-into-grand-rapids-region/.

The Gaines Charter Township fulfillment center will be the fourth facility Amazon has established in Michigan, and the first on the west side of the state. In September 2017, the company announced plans to establish a facility Charter Township of Shelby, investing $40 million and creating 1,025 full-time, full-benefit jobs. The project resulted in a $4.5 million MBDP performance-based grant. In June 2017, Amazon was awarded a $5 million MBDP grant for the creation of a fulfillment center in the city of Romulus, a project that is on track to generate total investment of $140 million and create 1,600 jobs. In addition, Amazon was awarded a $7.5 million MBDP grant in December 2016 for the creation of 1,000 jobs at a new, $90-million fulfillment center in Livonia.

Gerdau Macsteel, Inc. is one of the largest steel producers in North America, manufacturing products servicing the construction, automotive, agriculture and energy markets. The company’s North American divisions focus on long and special steel projects such as rebar, beams and piling, merchant bar quality and more. The company plans to expand at its facility in the city of Monroe that will increase capacity of special bar quality steel used in the automotive manufacturing process. The expansion is expected to generate a total capital investment of $115 million and retain 530 jobs. The Michigan Strategic Fund today approved an exemption from the State Essential Services Assessment for the company valued at $2,407,000. To learn more about career opportunities with Gerdau, visit here: https://www.gerdau.com/northamerica/en/people/career-opportunities.

“Gerdau Macsteel. Inc. is an important manufacturing company that contributes to the employment base and financial stability in the City of Monroe,” said Monroe Mayor Robert Clark. “I am thankful for Gerdau's continued commitment to the community and the capital investment through this expansion project, as well as the Michigan Strategic Fund partnership, that will retain employment levels at Gerdau for years to come.”

The City of Detroit Brownfield Redevelopment Authority received MSF approval of $2,131,165 in local and school tax capture for the Wolverine Packing Co. expansion in the city of Detroit. Wolverine Packing is a large meat wholesale processor and distributor with 500 employees. The company needs to expand production and has identified an underutilized eight-acre site within the Eastern Market district, where it will construct a new cold storage facility. The project is expected to generate a total capital investment of $40 million and create 50 jobs. The tax capture will be used to alleviate brownfield conditions at the site and make it suitable for redevelopment. The city of Detroit is contributing a 12-year Industrial Facilities Tax exemption in support of the project. Individuals interested in careers with Wolverine should visit https://www.wolverinepacking.com/careers/.

351 W. Western LLC and Great Lakes Development Investments, Inc. plan to construct a new six-story, mixed-use building on .17 acres in downtown Muskegon. The completed project will include retail and office space with three floors of residential market-rate apartments. The project is expected to generate a total capital investment of nearly $7.3 million and create 29 full-time equivalent jobs, resulting in a $1.5 million Michigan Community Revitalization Program performance-based loan participation. The project is Phase 1 of what is expected to become a three-phase development that will be built on vacant adjacent parcels, and is expected serve as a catalyst for additional revitalization in downtown Muskegon. The project is a community-wide priority with the city of Muskegon contributing an Act 255 tax abatement, a Neighborhood Enterprise Zone tax abatement, a $500,000 loan, and a $12,407 environmental grant. The Muskegon County Community Foundation is also contributing $1.5 million in loans.

The County of Washtenaw Brownfield Redevelopment Authority received MSF approval of $5, 204,760 in local and school tax capture for the redevelopment of vacant property into the 1140 Broadway Street project, developed by Morningside Group, in the city of Ann Arbor. The project will consist of a three-phase, mixed-use urban-style infill development that will include residential rental and for-sale units, retail space, and parking. The project is expected to generate a total capital investment of $213 million and create 25 full-time equivalent jobs, and will redevelop underutilized, highly contaminated property into much-needed residential and commercial space in Ann Arbor. The tax capture will be used to alleviate brownfield conditions, make the property suitable for redevelopment, and make public infrastructure improvements at the site.

MSF also approved a bond authorizing resolution for private activity bond financing of up to $12 million for Greenville Venture Partners, LLC. Greenville Venture Partners is establishing a 55,000-square-foot dairy processing facility in the city of Greenville that will help provide an outlet to process the current surplus milk supply in Michigan. The project is expected to generate a total capital investment of $57.9 million and create 33 jobs. In March, the project was awarded a $412,500 Michigan Business Development Program performance-based grant in support of the project.

In addition, MSF today approved a one-year extension of an existing contract with Aviareps for leisure travel promotion in China in the amount of $270,000.

“Today’s projects, including major business expansions and community revitalization projects in west and southeast Michigan, will fuel new economic activity across Michigan, strengthen communities, and create well-paying jobs for our residents,” said Jeff Mason, CEO of MEDC, the state’s chief marketing and business attraction arm that administers programs and performs due diligence on behalf of the MSF.