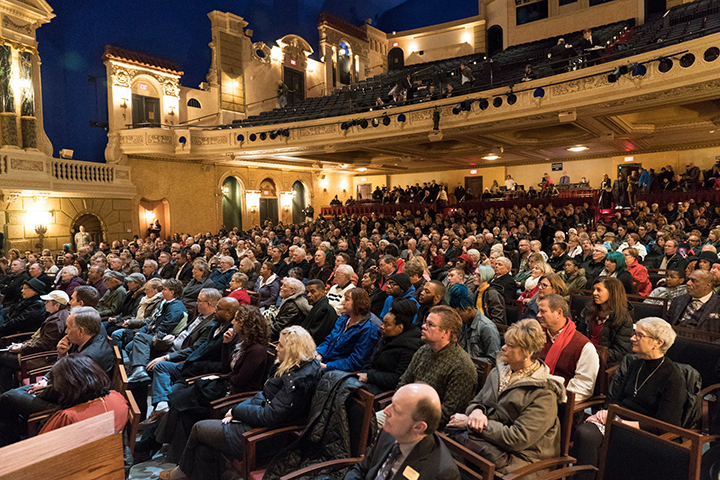 As many as 800 Flint residents stood outside the Capitol Theatre, waiting amid a biting December chill for the doors to open.

This was their moment.

The historic downtown cultural site that held fond memories for many residents had been restored. And, for those who endearingly refer to themselves as “Flintstones,” it felt as if a summer breeze had swept them into the promise of a city on the rise, overcoming the struggles of the past several years to celebrate what Flint Mayor Karen Weaver referred to as a “symbol of our comeback story.”

Two years ago, many of the same Flint residents were in line on sweltering July day to see first-hand the dilapidated interior of a 90-year-old building that had fallen on hard times, but had never been neglected.

That was days before the $37 million restoration began.

On Thursday (Dec. 7) when the doors opened and a ribbon-cutting ceremony christened the renovated Italian Renaissance-style theater, a proud civic-minded crowd filled the lower bowl of the 1,600-seat venue.

“Those of us here today must become ambassadors to spread the word that you have to come to Flint to see this place,” said Lt. Gov. Brian Calley, who attended the ceremony along with Flint Mayor Weaver and others who were instrumental in the renovation project, including Jarret Haynes, executive director of the Whiting; Ridgway White, president of the C.S. Mott Foundation; Phil Hagerman, founder and co-owner of SkyPoint Ventures; and, Tim Herman, president of Uptown Reinvestment Corporation.

“The Capitol Theatre is going to reintroduce Flint to a whole new generation of people who haven’t thought of the city in a positive light in a long time,” said Calley. 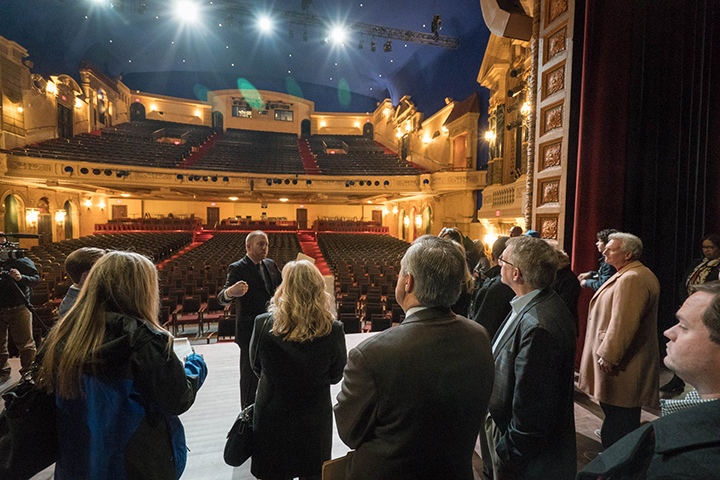 he renovated theater stands as a testament to Flint’s vital and productive collaboration among the business community, foundations, local cultural institutions and the state, said Jarret Haynes, executive director of the Whiting, which manages programing and operations at the Capitol Theatre.

“This 90-year-old building has withstood the test of time,” he said. “When it opened, it was the community’s large-screen TV. Today, people should think of the Capitol Theatre as the community’s living room. Ninety years of stewardship has made this restoration possible.”

In February 2016, the Michigan Strategic Fund approved a $5.5 million Michigan Community Revitalization Program performance-based equity investment to support the redevelopment of the Capitol Theatre, which, in addition to the private investment, will create 82 full-time jobs.

In addition, the project received a $500,000 grant from the Michigan State Housing Development Authority, an expected $3.7 million federal historic tax equity, $15 million grant from the C.S. Mott Foundation, and $1 million short-term loan from the Community Foundation of Greater Flint along with private contributions.

The theater is expected to draw between 60,000 and 80,000 patrons per year, bringing significant foot traffic and economic activity to the downtown area.

The Capitol Theatre joins a list of theaters located in downtowns and central business districts around the state that have been renovated with the support of the Michigan Community Revitalization Program. Those renovated theaters include:

During the past several years, the MSF has supported a range of developments in downtown Flint, including the Farmers Market, Health & Wellness District, rehabilitation of the Woolworth Building into the new Mott Community College Culinary Arts Teaching Facility, Pure Michigan Micro Lending (to assist small business financing), and Huntington Bank’s expanded call center.

Michigan Council for Arts and Cultural Affairs, which is located within MEDC, has awarded grants to the Flint Institute of Arts, Flint Jewish Federation, Friends of Modern Art and the Whaley Historical House Association.