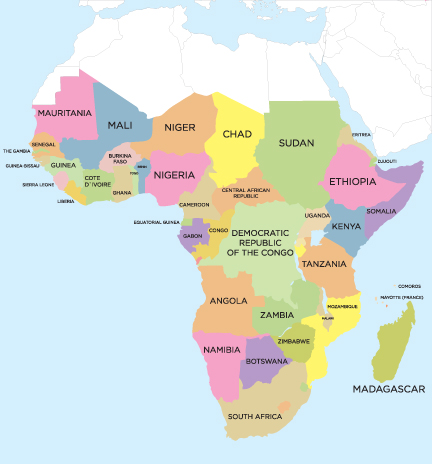 The current estimate for economic growth is 4.4 percent in 2016 and 4.8 percent in 2017. Seven of the top 10 national growth markets are based in SSA. The region has a population of approximately one billion people and an economy over $1 trillion. Many countries are moving into the middle income range of development. American exporters stand to gain from Africa’s huge resource base as well as the varied requirements of a continent diversifying across many industries, including:

Geographically, the coverage region is over 9.1 million square miles, covering 50 countries – three times the size of the continental U.S. Culturally, the continent is vast in ethnic and linguistic diversity, although some commonalities exist. Regional economic communities across Africa are amalgamating into a larger model.

The Southern Economic Development Community (SADC), the East African Community (EAC), and the Community of East and Southern Africa States (COMESA) are moving into a Tripartite African Economic grouping, based on a model similar to the European Union. West Africa’s ECOWAS is already a well-integrated region and may move toward joining later. The possibilities of a common market with a common currency, more open borders, and better transport linkages making for more effective trade will benefit American business.

English is effectively the business language across most of the continent and common law, similar to American legal frameworks, is in place in most national jurisdictions making contractual requirements similar.

Southern Africa: Southern Africa is the powerhouse marketplace of Africa. The Southern Africa Customs Union includes South Africa, Botswana, Lesotho, Namibia and Swaziland forming a region with first class infrastructure, world class banking and strong company governance and a diversity of industrial sectors. This is enhanced with the further membership of the SADC: Angola, Congo, Malawi, Mozambique, Zambia, and Zimbabwe (covered from our SA offices). This region has a diverse requirement for a wide variety of sectors: manufacturing, automotive manufacturing and components, chemical, hospitality and tourism, mining equipment, agricultural and food processing technologies, IT, infrastructural requirements and retail and tourism related goods and services. Tourism and hospitality has replaced mining as the foremost foreign currency earner in the region recently as the economy further migrates toward a service orientation.

West Africa: West Africa is keystoned with Nigeria, Africa’s largest economy, and Ghana, a country with a relatively long history of political and economic stability in the region. Other important markets are include Cameroon, Ivory Coast and Senegal. West Africa has become important to U.S. interests, not least because of its energy, mining and specialty agriculture. Approximately 10 percent of U.S. imported energy requirements originate in Nigeria. Ghana is more diversified with mining, agriculture, energy and light manufacturing. Sectors of interest for U.S. firms in Economic Community of West African States (ECOWAS) are energy and mining equipment and consumables, manufacturing machinery, food processing, agricultural technology as well as a host of other sectors designed to build the lifestyles of an emergent young middle class

East Africa: The East Africa community with the leading economies of Kenya and Tanzania is thought to be the fastest growing global region over the next two decades by consultants Ernst & Young. This region encompasses over 160 million people and is moving toward being a middle income region, with a fast growing middle class. Tanzania is a key country for mining, while Kenya is an important agricultural country. Both countries are rapidly diversifying their economic base. Sectors of interest for U.S. firms in the EAC (Kenya, Tanzania, Uganda, Rwanda and Burundi and recently South Sudan) are mining equipment and consumables, manufacturing machinery, agricultural technology, infrastructure related inputs as well as a host of other sectors designed to build the lifestyles of an emergent young middle

Indian Ocean Islands: This regional coverage is composed of five African Indian Ocean nations: Comoros, Réunion, Madagascar, Mauritius and Seychelles. These nations share geographic proximity, historical and demographic relationships, natural resources and common development issues. GDP levels vary as Réunion is incorporated into France, Mauritius and Seychelles are middle income countries, while the Comoros and Madagascar are low income countries. Opportunities exist in hospitality and tourism sectors, marine technologies, mining technologies, renewable energy, IT, banking, as well as other sectors. Mauritius is an offshore banking and free port center for the Indian Ocean. It has the highest standard of living in Africa.

MEDC/CGLSLGP Africa covers all of these regions with staff and contractors based in the key markets of South Africa and Mozambique in Southern Africa, Kenya and Tanzania in East Africa, Ghana in West Africa and Mauritius in the Indian Ocean region. This allows for Michigan exporters to benefit from the expanding opportunities across almost the entirety of this large region. The office is looking forward to serving Michigan exporters.