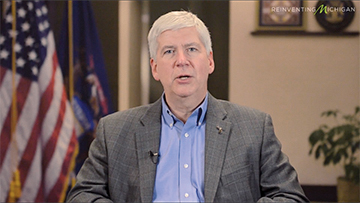 Citing computer science as a 21st-century skill in a top job-growth sector, Governor Rick Snyder has proclaimed December 7-13 “Computer Science Education Week” in Michigan. To commemorate the week, schools and students across the state are encouraged to engage in an Hour of Code.

“We need students to be proficient in science, math and coding for Michigan’s comeback to continue,” said Gov. Snyder. “We hope teachers and students find time to learn about computer science and the many promising careers associated with the field of study.”

Building alliances with schools is the result of the new direction of the Michigan Film & Digital Media Office, which is the catalyst for elevating awareness of computer science education and the expanding career opportunities in the state’s digital media industries.

“We want to make sure all schools have equal access to computer science materials, and ‘Hour of Code’ gives educators and students an easy-to-use and immersive experience,” said Jenell Leonard, commissioner of Michigan Film & Digital Media Office.

“Regardless of location or test scores, we need to empower today’s students with the resources needed to succeed in a high-tech world where critical thinking and creativity are premiums,” she said.

“We want to make sure all schools have equal access to computer science materials, and ‘Hour of Code’ gives educators and students an easy-to-use and immersive experience,” said Jenell Leonard, commissioner of Michigan Film & Digital Media Office.

Hour of Code is a global initiative to reach students in more than 180 countries with online tutorials available in over 40 languages. The purpose is to demystify computer coding and encourage students to explore the possibilities of computer science, including the range of career choices.

Organized by Code.org, Hour of Code draws on a coalition of partners, including Microsoft, Apple, Amazon, Boys and Girls Clubs of America and College Board. The online tutorial works on PCs, smartphones and tablets.

According to Code.org, anyone can host an Hour of Code.

Proclaiming the first week in December as “Computer Science Education Week” is in part to honor Grace Hopper, among the first female pioneers in computer science. Hopper worked on the Harvard Mark I computer, a general purpose electro-mechanical computer developed by IBM used during World War II to calculate mathematical tables.

Improving computer science education is at the core of Computer Science First (CS First) program, a partnership between the Michigan Film & Digital Media Office and Google. A no-cost online-based curriculum designed for middle-school students, CS First aims to increase accessibility to a discipline where proficiency is a highly marketable skill to current and future job prospects.

Google provides the curriculum (available through a website to classrooms) to schools around the country. The introduction of CS First in Michigan, however, marks the first time a state agency has been the primary coordinator of the program.

Currently, there are 15,000 job openings in the computer sciences in Michigan. Job growth in the state is increasing at three-and-a-half times the average compared to other industries. By 2020, the U.S. Bureau of Labor Statistics predicts there will be 1 million more computer science jobs than graduating students who qualify for the jobs.