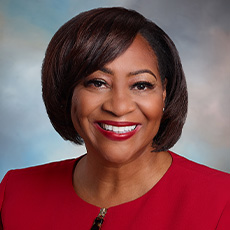 Prior to becoming the first African American president and CEO to lead the foundation in its history, she served in a variety of positions at the Kellogg Foundation after joining the organization as the controller in 1987. Most recently, she was the executive vice president of operations and treasurer, which included oversight of all financial plans, policies and relationships within the financial community and WKKF’s Technology, Human Resources and Administration, Finance, Program Services and Quality & Organizational Effectiveness functions. In this role, she was pivotal in connecting and integrating WKKF’s leadership committees: the Executive Council, Program Leadership Council, Talent Board and Organizational Advisory Team, ensuring unified execution of the organization’s mission and strategic framework across all programmatic and priority place areas. She also provided leadership for WKKF’s place-based grantmaking in Mississippi and New Orleans since 2011, launching a significant effort to help set young males of color on the path to success in 2013.

Tabron has played an active leadership role in the Kellogg Foundation’s racial equity, diversity and inclusion work for more than two decades – both internally through work with its board and staff, and externally through its work with grantees, partners and vendors.

Tabron holds a bachelor’s degree in business administration from the University of Michigan – Ann Arbor and a master’s degree in business administration from the Kellogg Graduate School of Management at Northwestern University. She received honorary doctorates from Grand Valley State University, Ithaca College, Marygrove College and Union Institute & University. She is a certified public accountant. She is also a graduate of the inaugural class of the Council on Foundations’ Career Pathways Program. In 2020, Tabron was named the recipient of the Bynum Tudor Fellowship at Kellogg College in Oxford, England.