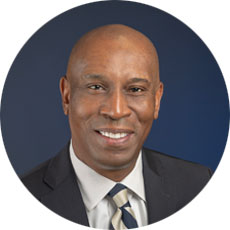 Kevin D. Johnson is the President and Chief Executive Officer for the Detroit Economic Growth Corporation (DEGC), the city’s leading economic development driver. He has served as president and CEO since June 2018. Under Johnson’s leadership, the organization aims to create 10,000 jobs, open 140 small businesses and secure $3.4 billion of capital investment for the city by 2020.

A veteran of economic development, Johnson has served in both public and private economic-development positions throughout the U.S., including roles in Arizona, Florida, North Carolina and Georgia, before coming to Detroit.

In his most previous role at Invest Atlanta, Johnson led the economic development program for the city, helping to create 31,000 jobs and generating $3.7 billion in new capital investment. He also played a key role in bringing 17 new corporate headquarters to the city, including Porsche Cars North America, Groupe PSA, and NCR.