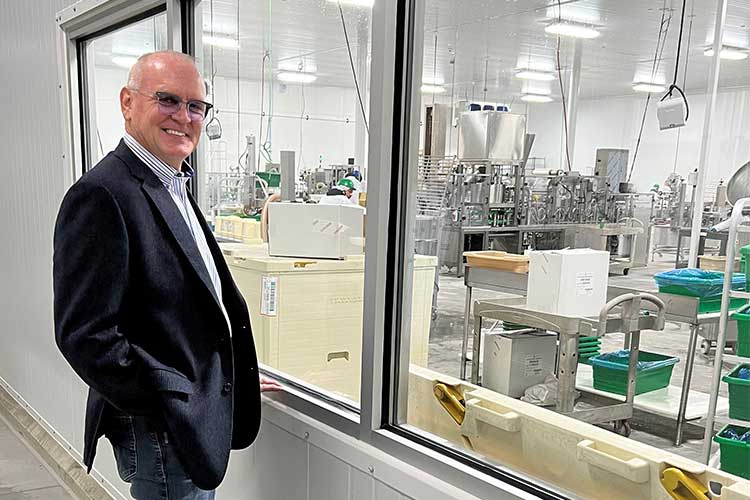 As a leader in the food distribution industry, Superior Foods Company out of Grand Rapids has provided fresh, quality products for years. Superior Foods is a wholesale processor and distributor of meat, seafood and related food products to restaurants and grocery chains in Michigan and throughout the Eastern United States. They have been expanding their service area and are committed to sourcing from local suppliers and farmers throughout Michigan and the Midwest.

While the company has grown over time, with over 250 employees, it began with a simple fish market over 70 years ago. Superior Fisheries on Cherry Street in Grand Rapids offered a variety of retail items including fresh fish and seafood, but also sold freshly fried fish and chips to-go. As sales continued to grow, the company’s space quickly became too small.

They purchased 10 acres of property ‘way out’ by the airport in 1975 and in the spring of 1976, they moved into their brand-new home sporting a new name – Superior Seafoods Company. As time passed, growth and change continued. In the early 2000s, Superior Seafoods officially became Superior Foods Company. The name change signified an expansion that has helped define the scope of the business beyond its initial roots.

Decades later, the family-run business continues to expand with Jim Osterhaven, president and CEO, at the helm. Superior Foods’ business model breaks down into two main divisions: Foodservice and Retail/Grocery.

The Foodservice division includes 12 District Sales Representatives (DSRs) that cover the entire lower peninsula of Michigan, the eastern side of the Upper Peninsula, including Mackinac Island, northern Ohio, northern Indiana and Illinois, including Chicago. Six of the DSRs have over 25 years of foodservice experience each and four of them are Board Certified Chefs. Defining factors for this division are product knowledge, professionalism and service. This division sells to restaurants, hotels, higher education, healthcare and senior living and independent specialty retailers.

The Retail/Grocery division partners with grocery store chains, supermarkets and national wholesale distributors. The scope of the product mix is significant, including all types of fresh and frozen seafoods and meats. With an eye toward helping their customers with labor saving products, they continue to introduce new pre-packaged, value-added protein items as well as more packaged, ready-to-eat items new to their lineup in the last few years. Thanks to the warehouse and distribution arms of their national customers, their products can be found from coast to coast, with a little higher level of exposure closer to home in the Midwestern states. The company continues to advance this division of their business by expanded its capabilities as a private labeler and co-packer for local, regional and national brands/businesses.

Over the years, Superior Foods has grown with the addition of its three brands: Superior Select, River City Meats and, in 2022, Black Pearl Seafoods. The company has also grown its geographical reach, especially with its retail business. The company is eagerly anticipating the addition of its Ready-To-Eat (RTE) production facility, opening down the street from its current location in Spring 2022.

As with most industries during the COVID-19 pandemic, the restaurant and food supplier industries experienced several challenges. While restaurants were closed, Superior Foods was able to lean on its grocery and retail side of the business to survive.

“We were fortunate to have a significant part of our business, about half, already in that grocery and retail sector,” said Osterhaven. “Through the decades, that setup has served us well, with one side supporting the other: if one was down, usually the other was up. It was obvious that we were going to need that support like never before.”

The company’s traditional areas of retail business grew, but Osterhaven also found success in other segments of the food business where Superior Foods already had a presence and system in place. The sudden increase of people cooking at home jumpstarted the acceleration of the company’s prepackaged, case-ready seafood and meat items. Additionally, while the company had been selling to specialty food markets around the state for decades, the pandemic opened the door to seeking out more markets in that customer segment.

“In the end, we were still down in overall business while the restaurants were closed, but since they opened back up, our sales have continued to climb to above pre-pandemic levels now,” Osterhaven said.

Superior Foods has been committed to expanding and changing the way that they do business since the pandemic began. The company reached out to Macatawa Bank to request a working capital line of credit to increase working capital availability.

Macatawa Bank contacted the Michigan Economic Development Corporation (MEDC) in May 2021. Through the MEDC’s Collateral Support Program, Capital Access provided $2,500,000 in collateral support on a $10,000,000 line of credit.

“The MEDC Collateral Support Program was brought to us as an option by our commercial banker at Macatawa Bank, Andy Schmidt,” said Keane Blaszczyinski, Chief Financial Officer at Superior Foods. “Superior will continue to utilize the Collateral Support Program through the MEDC to fund growth well beyond the amount we could grow through traditional borrowing formulas. Through the enhanced borrowing on our inventory assets, we have been able to fund growth opportunities that would not have been available through traditional asset-based line of credit facilities and formulas. This allowed Superior to grow top line revenue of nearly 30 percent year over year.”

Increased volume in grocery store chains within existing customer base and expansion into the number of chains supplied. Due to labor shortages retail chains are moving away from full-service counters to pre-packaged meal solutions. Superior Foods has positioned itself to meet these needs.

Looking to the future, the sky is the limit for Superior Foods.

“As we continue to mature and grow as a business, an interesting shift is happening,” said Osterhaven. “We have been a food distributor and seafood/meat processor for as long as we have been in business. While I do not see ever getting out of the distribution business, processing all types of proteins and fresh foods seems to be an area that we will provide us the most opportunity to grow in the future.”