The oldest company in its industry balances being green and being innovative by embracing Industry 4.0 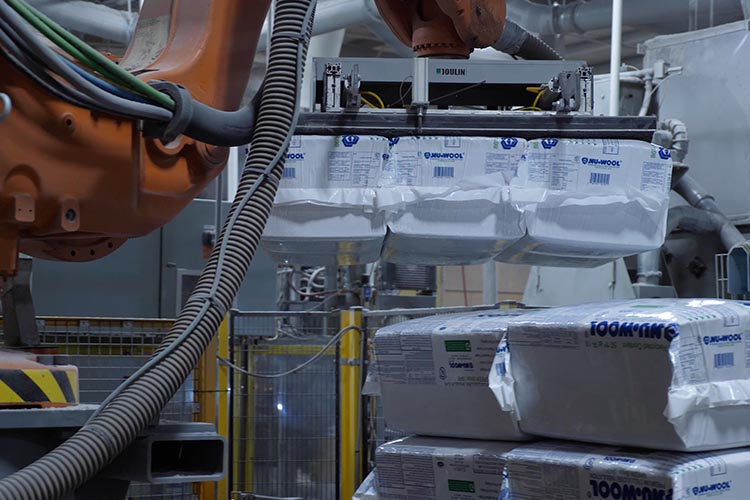 You can find early adopters in the most unlikely places. Jenison, Michigan, for example-home of Nu-Wool.

To most people, an "early adopter" is an individual, often purchasing at the cutting edge of consumer technology. But companies can be early adopters, too. And sometimes, early adoption is less about new technology than it is about being the first company in an industry to adopt it.

Founded in 1949, Nu-Wool is the oldest company in the cellulose manufacturing industry. It turns paper into cellulose insulation, packages it in bags, and sells the bags to contractors and lumberyards. They, in turn, install it in both commercial and residential new construction and retrofit applications.

Nu-Wool is a small manufacturer with proud roots as a third-generation, family-owned business with about 35 employees.

And it was a "green" company back when "green" typically referred to the color of things. Of course, all insulation is green in the sense of helping to conserve energy. But Nu-Wool's product is one of the most environmentally friendly, energy-saving insulation products available. And operationally, the firm is as greenas it can be. It recycles about 50 million pounds of paper annually, much of which would otherwise wind up in landfills, with its finished product being made of 86% recycled material.

Nu-Wool also stands out in the industry for other unique efficiencies, such as proprietary manufacturing equipment and its own trucking fleet.

But for all that, Nu-Wool approached the idea of adopting new technology, especially the ones defining Industry 4.0, as relatively small companies often do –reluctantly.

"I think it's sort of that ripping the Band-Aid off theory," said Matt Henderson, vice president of Nu-Wool. "Until you do implement these new technologies, you hear horror stories. We fall into the small-to-medium-size business. For us, a lot of times, it seems that the focus is always on big manufacturers. I think that it's kind of scary for a smaller manufacturer that doesn't have the resources to support it."

Market forces, including the increasing price of fuel and the cost and availability of raw materials, drove Nu-Wool to overcome its resistance and begin exploring some of the Industry 4.0 technologies that could help it leverage its efficiencies and maintain its competitive edge.

Packaging and shipping provided an opportunity. Previously, Nu-Wool used a partially automated system to package its product and a labor-intensive system to load it onto trucks for shipping. An employee might spend as much as six hours a day in a tractor-trailer, stacking bags of insulation.

So Nu-Wool stepped into Industry 4.0. The firm installed a $800,000 automated packaging system: a major piece of this system is a robotic cell representing two of the six technologies which comprise Industry 4.0 – advanced robotics and data analytics. The cell includesthe robot itself, industrial computers –called programmable logic controllers (PLCs) - to operate the system, and other necessary peripheral devices.

It was not, at first, a completely happy union. Nu-Wool had no one on staff to program the system, no one who understood robotics or PLCs, no one equipped to use the data the system generated to track costs, reduce downtime, or create additional efficiencies. As Matt Henderson noted, with circumstances left as they were, Nu-Wool's new robot might have wound up relegated to a storage facility somewhere.

That changed when Nu-Wool partnered with Feyen Zylstra LLC, a Michigan-based industrial technology company specializing, in part, in Industry 4.0 solutions. Together, the companies got to work on reprogramming, changing the speed of processes, and upgrading equipment.

Nu-Wool also consulted with the Michigan Manufacturing Technology Center (MMTC) which, in partnership with the Michigan Economic Development Corporation (MEDC) and Automation Alley, is working on preparing half of Michigan's small and mid-size companies to adopt Industry 4.0 technologies.

Thanks to efforts like those, Nu-Wool mastered its new robotics system, which paid for itself in increased efficiency within just two years. The benefits to the company are significant. By improving its packaging lines, Nu-Wool boost edits productivity and increased production 25% during a period of particularly strong demand. In the process of learning the system, the company built valuablenew relationships with new vendors.

Perhaps most significantly from a long-term perspective, Nu-Wool has a growing interest in Industry 4.0 technologies. For example, the company had no idea how much data the new system would generate. It is now looking into AI to help harness and package that data for predictive maintenance and forecasting. It is exploring machine vision equipment for sorting materials. And it plans to continue consulting with the MMTC as it works to leverage its new data and seek other new technology that will help make it still more efficient.

Henderson acknowledged that there were bumps on the road to applying the new technology. And he credited the company's Michigan location with helping overcome the obstacles.

"Michigan is different than other states," Henderson said. "It has a very entrepreneurial spirit and dedicated, long-term employees who still see the advantages of staying with one company for a long time. If we need something, we don't have to leave Michigan to get it. Whether it's packaging robots or saws for our equipment, we don't have to look anywhere else. The innovative and entrepreneurial spirit gives us a great base of partner companies to work with."

Henderson also had a word of advice for other small to mid-size firms considering adopting Industry 4.0 technologies.

"Innovation has to be part of the team's culture. It can't be one person trying to drive an idea. If your team doesn't believe in it, isn't on board with it, and doesn’t understand that there is always pain in growth and innovations it will not succeed. Here at Nu-Wool, it’s our team that makes it all work."

To learn about Industry 4.0 technologies, support or resources provided by the MEDC, please visit http://www.michiganbusiness.org/industry4-0