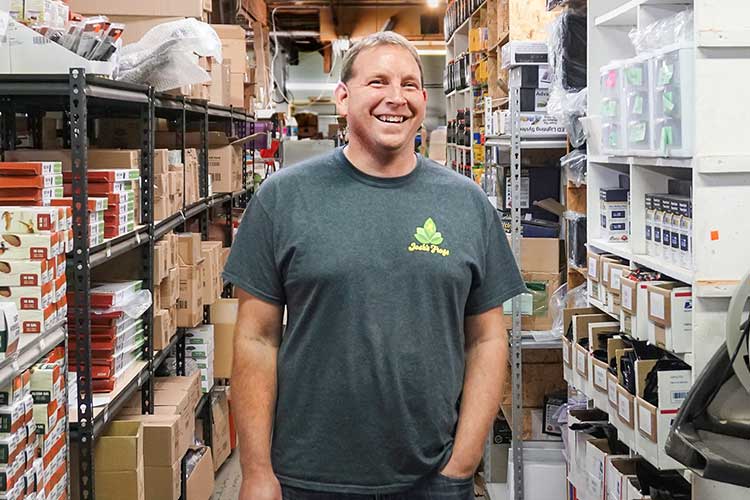 Josh Willard has been passionate about nature and wildlife since he was a kid. Little did he know that his passion would grow into a successful business, aptly called Josh's Frogs. As an online retailer of amphibians and reptiles – as well as equipment and supplies – the company has since become the largest producer of captive-bred dart frogs in the United States.

“I grew up near a swamp catching frogs, snakes and turtles as a young boy,” said Willard. “Josh's Frogs started as a small hobby in my apartment bedroom. I wanted a terrarium of tropical frogs, but couldn't afford all the stuff I needed, so I bought a bunch of stuff in bulk, sold off the extra and got my tank of frogs. In 2008 this hobby turned into a business when my internship was cancelled at the last minute.”

After moving to a house, Josh utilized the space in his garage, where he expanded in selling other products as well and hiring his first couple of employees. His dedication to customer service and quality supplies quickly led to a growing success.

In 2009, the company continued its growth as it moved to its first facility in Corunna, Mich., where it soon employed four people. With the extra space, the company brought plant propagation, care and shipping in-house, and began carrying a full line of live plants for dart frog vivaria. In expanding their product selection and developing their own product line, Josh’s Frogs once again ran out of space.

In 2013, Josh’s Frogs moved into a five-story, 37,000-square-foot warehouse in Owosso, Mich. The company currently employs over 100 people and is considered the largest online retailer of reptile and amphibian products, as well as the largest breeder of captive-bred dart frogs in the country. The larger space has allowed Josh’s Frogs to increase its variety of live plants, animals and feeder insects offered. While the facility is closed to the public, the company’s widespread presence online – from its robust website and YouTube channel to its Facebook page with over 150,000 followers – provides a wealth of information.

Willard first learned about services from the Michigan Economic Development Corporation (MEDC) through the Shiawassee Economic Development Partnership (SEDP); when he looked at refinancing the company’s existing commercial real estate to further invest in growth, Willard was connected to the MEDC’s Collateral Support program by Andrew Bellingar, Vice President of Business Banking for Fifth Third Bank.

Through the Capital Access program, MEDC works directly with lenders and provides upfront financial support so they can provides traditional loans to small businesses they otherwise would not be able to provide.

“There is often a challenge working with rapidly growing companies and finding adequate collateral,” said Bellingar. “Many companies reinvest their profits back into the company to finance their growth. In addition, appraisals occasionally pose an issue if they come in lower than expected. I reached out the MEDC and they responded immediately. They processed the financial information and quickly provided us with an approval to complete the deal. The MEDC was responsive, professional and eager to provide assistance any way they could. They are a true partner and I look forward to working with them in the future.”

Capital Access provided $323,810 collateral support on a $794,476 real estate note, allowing Josh’s Frogs to continue its growth in the years ahead.

“Our recent expansion has opened space that will allow us to continue to expand,” said Willard. “We have expanded our space for more plants, more reptiles, more frogs, more pet bugs and more of the supplies you need to take care of those pets.”

As a company, Josh’s Frogs takes pride in providing education and support for its customers in addition to healthy, captive-bred animals, setting themselves apart within the industry. Year over year, the company has continued to see growth; in fact, Josh’s Frogs has been listed on the Inc. 5000’s Fastest-Growing Companies list for the past four years.