Grand River Aseptic Manufacturing taps into Michigan’s manufacturing heritage and legacy of pharmaceutical discoveries to achieve success on the state’s west side. 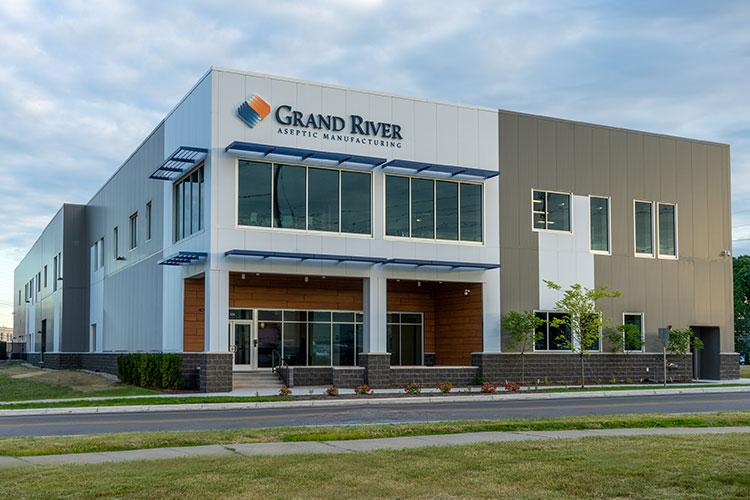 Based in Grand Rapids, GRAM quickly made a name for itself in the region as an impact-driven, community-centered business, with much of its success having been accelerated as a result of its origins in West Michigan.

In its infancy as a company, GRAM recognized that a key factor of both its longevity and ultimate success would depend on the quality of talent it could attract. As a result, the company focused on developing relationships with local colleges to attract young graduates to enter the medical manufacturing field in Michigan, while also leveraging the region’s rich medical devices ecosystem.

GRAM initially focused on its small-scale manufacturing clientele and in 2014 and 2015 pivoted towards both clinical and commercial clients. With explosive growth, GRAM continued to expand, and in 2018, it recognized that its fast-paced success meant it was outgrowing its original facility in Grand Rapids. As GRAM began looking to expand, it considered locations in Indiana and Wisconsin, but ultimately doubled down on its commitment to Michigan – and the west side of the state, specifically – in part due to the hands-on support and guidance it received from the Michigan Economic Development Corporation (MEDC).

With support through the MEDC’s Michigan Business Development Program, the company broke ground on a new facility in 2018, investing more than $60 million in the area, creating over 100 new good-paying jobs and increasing its capacity to support commercial clients with large-scale manufacturing projects – all while staying rooted in West Michigan.

“We are fortunate in West Michigan to have access to a robust life sciences ecosystem that has allowed us to continue leveraging a highly skilled talent pipeline,” said Tom Ross, President and CEO of GRAM. “When we recruit, there are great people in Michigan that have the skills that we need, and these are very technical positions that require a good amount of education, training and development. There is no doubt that our company’s growth and success has been made possible because we call Michigan home.”

Although GRAM has been in existence for less than 10 years, its success has begun generating national recognition as well, having been ranked on the Inc. 5000 list for four consecutive years beginning in 2017. In 2020, the company officially opened its new, state-of-the-art large-scale facility, expanding its client base and overall production capacity.

As COVID-19 evolved into a global pandemic later that very same year, GRAM found that its decade of hard work and impact across the industry would pay off. GRAM was selected by the U.S. Department of Health and Human Services and the U.S. Department of Defense to support the expansion of the United States’ capacity for manufacturing and distributing vaccines or therapeutics related to the COVID-19 pandemic. Soon after, GRAM entered into an agreement with Janssen Pharmaceuticals, Inc., one of the Janssen Pharmaceutical Companies of Johnson & Johnson, to support the manufacture of its SARS-CoV-2 vaccine candidate.

When Johnson & Johnson received emergency approval from the FDA in early 2021, GRAM got to work manufacturing the COVID-19 vaccine to be delivered throughout the country – all from right here in Michigan.

“The opportunity to serve the population with a vaccine to combat the COVID-19 pandemic and support response efforts is an extraordinary privilege,” Ross said. “GRAM is honored to serve our country and our partners in manufacturing solutions that can change the world. Our strong culture built on teamwork and accountability, coupled with our West Michigan roots puts us in a unique position within our industry. GRAM is one of the top contract development and manufacturing organizations in the country now, here in Grand Rapids, Michigan, and the future looks incredibly bright.”

Every day, the MEDC commits to helping companies like GRAM unlock new opportunities by investing and growing their business in Michigan. To learn more about the programs and services offered by the MEDC and how businesses around the world can benefit, go to michiganbusiness.org/services.