The concept of “it takes a village” rings true for the development, support and success of Eebu Health, a spin out of the University of Michigan (UM) based on technology supported by the MTRAC Life Science Innovation hub. Recently awarded Best Technology of the Year by New Enterprise Forum, Eebu credits much of its success to the supportive and nurturing startup ecosystem including the Michigan Economic Development Corporation (MEDC), its university partners like UM’s Innovation Partnerships, Michigan Medicine and the broader Michigan startup community. Eebu Health’s technology is aimed at improving health care follow-up rates by engaging patients in their own care plans and providing tracking tools to make sure no patient falls through the cracks. Several physician-led studies have demonstrated the efficacy of the solution.

The MTRAC Program was created in 2012 to accelerate the transfer of new technologies from Michigan’s institutions of higher learning into the commercial market by way of licenses or startups. In 2016 the program expanded as a statewide program to support translational research throughout the state of Michigan. The expansion reinforces the commitment to entrepreneurship, innovation, and economic growth by providing a pathway to accelerate the creation and transfer of new technologies into the commercial market.

Dr. Mark Newman, professor in the School of Information, Dr. John Hollingsworth, professor of urology at Michigan Medicine, and Dr. Michael Englesbe, professor of surgery at UM are the original collaborators of the healthcare IT, which was the technology for a surgical asset tracker. Through the partnership between MTRAC and UM, the research team received the UM Medical School’s Fast Forward Medical Innovation Kickstart Award, which allowed the research team to try a highly experimental project as a proof of concept much earlier than professional investors or friends and family would be ready to invest.

Upon demonstrating the proof-of-concept, the research team was awarded a 2019 MTRAC Statewide Project Award along with matching funds from Michigan Medicine, which supported two pilots beyond the scope of the initial proof-of-concept. Both pilots have demonstrated success, and the sites continue to leverage Eebu’s software. This support also allowed the team to recruit a CEO and a CTO, both seasoned startup executives who collaborated in the past leading to two exits. This was a critical step in commercializing the technology.

“Our professor innovators understood the need and the opportunity, but they needed to partner with professional managers to take their idea to the next level,” said Eebu Health Co-Founder and CEO Harvey Goodman. “The MTRAC award and what it allowed the team to do was critical in convincing me and our CTO, Deryl Seale, that this was a project worth investing our time in.”

The research team obtained a license from Innovation Partnerships at UM to start the company; from there, they worked with the university on commercialization activities and were matched up with a mentor.

Funding and mentoring received from MTRAC Life Science Innovation hub, Ann Arbor SPARK and Tech Transfer Talent Network (T3N) program helped the startup go from concept to reality. The T3N program began in 2011 as a collaboration between seven of Michigan’s leading research universities, including UM. Supported by the MEDC and the Michigan Strategic Fund Board, T3N is the first statewide network to provide critical expertise in the support of the commercialization of university technologies and the creation of startups with talent and business expertise.

“MEDC is a leader in the Michigan start-up community and has contributed to an environment that supports entrepreneurship like few other states. It’s not just about funding — it’s about coaching and networking, too. There is always someone enthusiastic about helping a start-up.” – Eebu Health Co-Founder and CEO Harvey Goodman

After a COVID-related delay, the Eebu Health team participated in the celebratory ringing of the UM Startup Bell in Fall 2021; the UM Innovation Partnerships ritual began in 2018, celebrating the moment when a UM commercialization project arrives at the point where a license is signed.

The connections made through Innovation Partnerships assisted in the process of looking for funding and working with the Michigan ecosystem that can support them on the journey into the commercial market. As a mentor, Graves used her software background and expertise in entrepreneurship and innovation to provide the company with a sales strategy, compensation plans and key introductions within the business ecosystem.

In addition to their mentorship with Graves, the team behind Eebu Health continues to get support from the UM Innovation Partnerships team, as well as resources through Ann Arbor SPARK, The Michigan Small Business Development Center, New Enterprise Forum and their mentor through the T3N program. 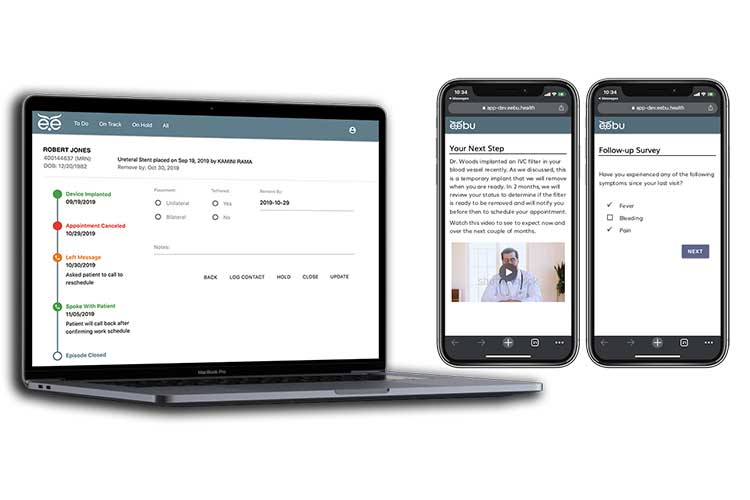 While the company is still young, Eebu Health is already gaining momentum and attention. Eebu has signed up additional customers and has been awarded a contract to extend its prostate cancer active surveillance solution from one major Michigan hospital to four before rolling it out to the entire state. At the New Enterprise Forum Annual Awards in February 2022, Eebu Health and Goodman were named the winner for Best Technology. From follow-up tracking to patient engagement, Eebu Health’s technology is aimed at improving the care and communication between doctors and patients.

“The broader startup investment community is generally not looking at very early stage, high-risk ideas,” said Goodman. “MEDC and University of Michigan Innovation Partnerships team help fill a gap between idea and investment-readiness. They helped convert our idea into a business. Our technology might still be a PowerPoint slide without that support.”

Learn how startups like Eebu Health get the support they need to be successful by visiting https://www.michiganbusiness.org/entrepreneurship/.